This is not an opinion piece, but an informational piece, as, frankly, I don’t need to tell anyone what I think about the derivatives market to help them form an opinion.  Anyone who truly understands the derivatives market will be apt to form an opinion very much like my own, even if they do not know my opinion.  As such, the purpose of this article is to help people understand what derivatives are, and how they work.  The banks do not want you to know what this article covers, and they are confident that you will not take the time to read.

Allow me to preface the article by saying that there are some legitimate uses for derivatives, such as a farmer, who has to buy seeds and other materials at the beginning of the growing season, and who also faces an uncertain price at the end of the growing season.  To reduce risk, the farmer might opt to buy a derivative at the beginning of the season, that guarantees his sale price at the end of the season.  There is nothing wrong with a farmer buying derivatives to reduce risk, but legitimate uses for derivatives make up an infinitesimally small portion of the overall derivatives market. 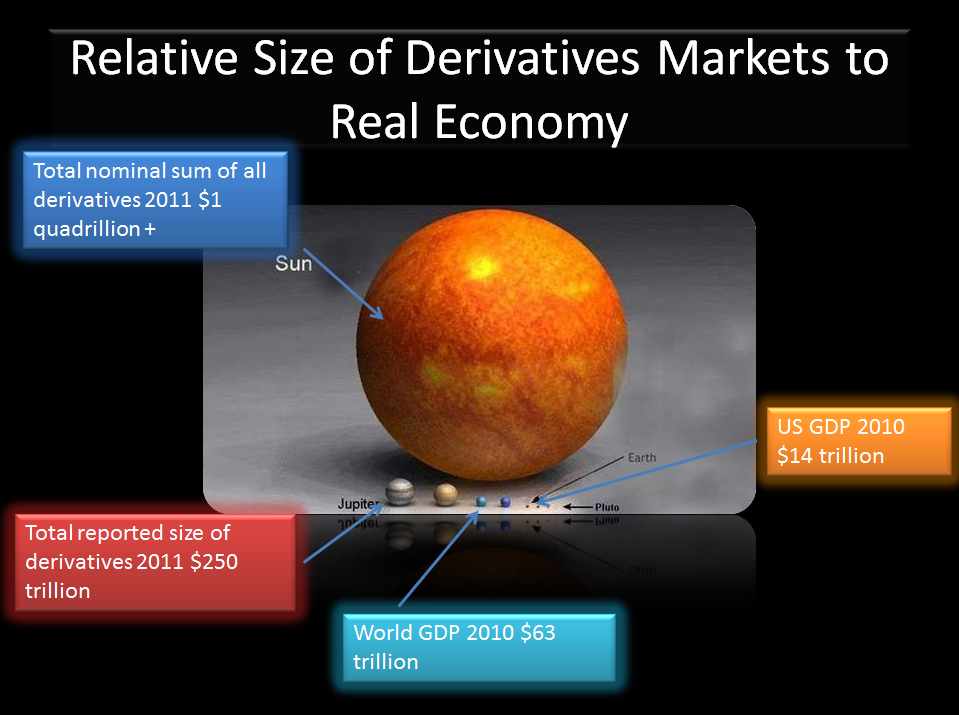 Today’s derivatives market is between $1.2 and $1.4 quadrillion dollars, which is more than ten times the size of the entire world economy.  This means that for every dollar that changes hands in the real economy, the world’s big banks bet ten dollars on what the impact of that dollar will be.  A quadrillion, incidentally, is a thousand trillion.  A quadrillion is a number so big that it is hard to fathom.

To understand why derivatives are so dangerous, one has to understand what they are. In their simplest form, they are a contract between two parties, in which one party says, I will buy 500 pounds of soy beans (or some other commodity) in one year’s time at today’s price of $5 a pound.  The other party agrees to sell 500 pounds of soybeans in one year at $5 a pound. Derivatives don’t have to cover soybeans, and they don’t have to be for a year.  The commodity, the price, the time, and all other aspects of the contract/derivative can be anything, and really, there need be no commodity at all. You could have a derivative based on the weather in which one side pays the other side $50 based on whether or not it rains on June 10.  You could have a derivative based on whether or not the Bulls win a particular basketball game (I’d have said the Pistons, but the Pistons are currently a very bad bet).  Derivatives can cover anything anyone can gamble on, as derivatives are, essentially, gambling contracts.

Derivatives can have value. If you have a contract that gives you the right to buy 1,000 barrels of oil in five years at today’s price, then if the value of oil rises, your side of the contract will have value, representing the difference in the actual value of oil (and the expectation for future value), relative to the contracted price.  The value of derivatives go up and down as the price of whatever they cover changes, and if it looks like a derivative is going to be a bad deal, then the value of the derivative may be negative, making it a liability rather than an asset.  The derivatives market represents gambling on a grand scale: for every dollar of economic activity that takes place anywhere in the world, the big banks bet more than ten dollars on what the impact of that dollar will be.

Let’s say you were at a casino playing black jack. The dealer gives you a card. “Stop the presses,” you say, “I have an ace! There is a good chance I will get a face card next and have black jack. Anyone want to bet on whether or not I will win this hand?” The next thing you know, you have contracts with five people betting on whether or not you will win. Those contracts can be bought and sold, so you borrow against their value and play another hand. Other people make side wagers and then borrow against the contracts they have written, using the proceeds to play more hands of black jack. Each of those hands is then bet upon, creating more and more contracts that can be borrowed against, creating ever more hands of black jack.

There would be no limit to how far this borrowing and gambling could go if not for the fact that there is a game of black jack going on in the real world, and as soon as the dealer puts another card on the table, the chance of winning or losing changes, causing the value of all the contracts to change.  Eventually the first hand of blackjack will end, and everyone with a losing contract will have to pay whomever they gambled with.

Each contract has a winner and a loser. The net value of all the contracts is zero.

If the losers are lucky they will have other wagers going on, where it looks like they will win, and will borrow against those other wagers to pay their losses, rather than having to pay with actual money.

That, in a nutshell, is how the derivatives market works.  Once people understand derivatives, various other things become clear, such as that the housing crisis was not some strange, unforeseen event, but rather, it was something that just happens from time.  Each crisis starts pretty much the same way: some bank (like Lehman Brothers) will end up with too much invested on one side of a gamble, and will suddenly find itself losing more than it can cover. With our black jack example it would be like you having $500 in hands, with only $50 in money, and suddenly losing $300 all at once. You would not have enough money to cover the debt, and would not have enough ongoing hands you can borrow against to make up the shortfall. You would go bankrupt, and most of the people you owe would not get paid.  That is exactly what happened to Lehman Brothers, and it would have snowballed to other banks had there been no bailout.

Our whole banking system is nothing more than a house of cards that must occasionally fail, and as with a real house of cards, the banks just keep making it bigger until it does fail.  Once it fails, the Federal Reserve bails the banks out, at our expense.

As bad as this racket sounds, it gets worse.  The banks bring real money into the picture by charging fees to write the derivatives contracts.  Bankers are getting paid, in some cases billions of dollars a year, to write contracts between their banks, other banks, and other institutions. The huge salaries and bonuses the bankers take – that’s like the black jack dealer paying himself out of the pot.

People say that the derivatives market nets to zero, with as many winning contracts as losing contracts, but that is not entirely accurate. Really the derivatives market nets to zero, minus whatever the bankers are paid. The bankers’ pay is nothing more than legalized embezzlement, and even if no bank ever lost gambling, the system would still be guaranteed to fail once in a while, because of the money sucked out to pay the bankers.  The ‘profits’ the banks make represent real losses banks will suffer in the future, when the next crisis hits, and the banks use the Federal Reserve (which they own) to bail themselves out.  As long as the Federal Reserve is there to bail the banks out, the process of bubbles growing and bursting, and bank bailouts each time the bubbles burst, will continue.

The bubbles are built in whatever sector(s) of the economy the banks are betting in.  In 2008, it was housing.  In 1929, it was the stock market, and the big banks are betting all over the stock market again, today.  Banks are also betting on college tuitions, and on healthcare.  Wherever you see a bubble, you’ll also find banks betting on the outcome, and paying themselves handsomely to do so.

Consider the risk.  If I told you to go to a casino and gamble, with the understanding that whatever you won, you could keep, and whatever you lost, taxpayers would cover, imagine the kinds of bets you could make.  Who does not want privatized profits with socialized risks?  That’s what our banks have: our banking system is a legal way to use risk, such that money gets siphoned from taxpayers to bankers. The gambling itself is just a shell game, with each bank winning and losing in roughly equal measure – the real prizes are the fees charged to write all the contracts.

If the system ever collapsed without a bailout, all the big banks would go bankrupt. All of them. Those who own the banks would lose their shirts, but the banks themselves would emerge from bankruptcy, intact (minus the parts that trade derivatives).  The new banks would be under new ownership, doing all of the things that we typically think of banks as doing (other than trading derivatives). The banks would even function while in bankruptcy.

Instead the Federal Reserve did what it was created to do – it stole money from you and me to save the banks, and to allow the bankers to keep paying themselves with our money.  The housing bailout represented the largest transfer of wealth from the many to the few in human history, and it will be eclipsed by an even bigger transfer of wealth the next time the system fails, each bubble being bigger than the last.

Historically, these banking failures seem to happen about once every generation or two, which is also the amount of time it takes for the public to forget.  That too is by design…

If the public knew how this racket works, the casino would close.  The big banks will never allow that to happen, but you can make it happen, simply by clicking on the share buttons, below!