I’m going off the reservation today, and writing about something that is closer to my heart than is even libertarianism.  This is not a libertarian post, and I hope my libertarian friends will excuse me for spreading what I hope is a message of hope, and of love, for our fellow mankind.  This post is a reaction to memes like the one shown below. 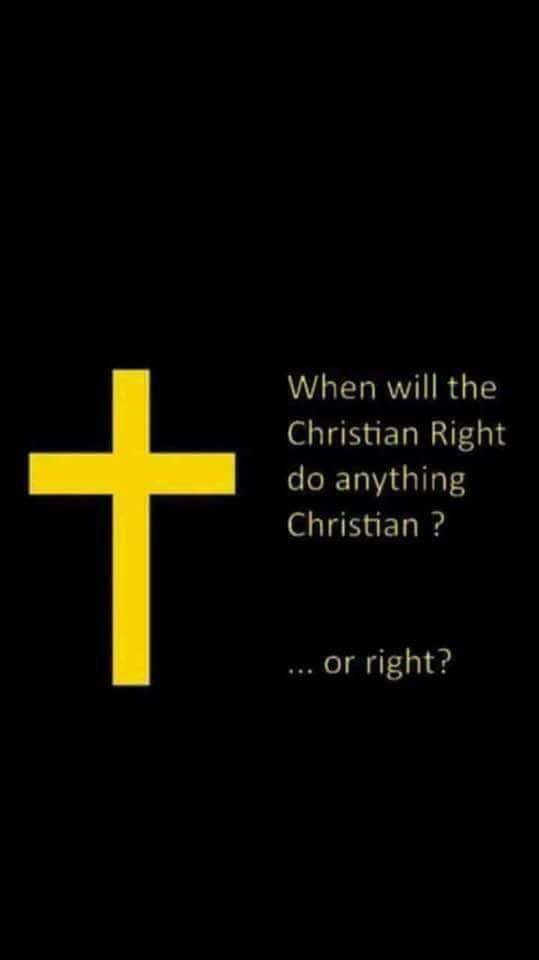 Christianity is a path – not a place. None of us will ever be Jesus, and so though we strive to live our lives like Him, we always fall short. You can choose to look at the failings, and condemn Christianity based on the sins of each individual Christian, or you can appreciate the attempt to be Christ-like even with the knowledge that the only person who could ever truly be perfect is Christ himself.

Once you get past the failings of mankind, and view Christianity as a path to follow rather than a place to find, you can move on to what exactly it is to be Christ-like. Did Christ feed the poor? Yes. But he setup no state welfare system, and did not call for one to be created. Christ would not have found it very Christ-like for an able-bodied person to sit idle when work was available (how can one help ‘feed the poor’ while also choosing to be poor?), and while Christ I’m sure would feed that person were they hungry, I’m very confident He would also tell them that their idleness is a sin, and would ask that they sin no more.

Does this mean wealth is a sin? Of course not. It is only a sin to put wealth ahead of God, as doing so is effectively worshiping wealth rather than God.

Similarly, addiction is dangerous to a Christian.  One who is addicted will be tempted to put their addiction first, ahead of God. All that is good in the world springs from God, and a Christian must embrace God before all other things.

What liberals will often do is to assume that they know better than anyone else what Christ would have done, and they will twist Christ’s words to suit their political agenda, by extension saying that anyone who does not agree with their political agenda must not be a very good Christian. In doing so, they completely miss the point, for Christ was about love, and today’s liberalism is about hate: hate of the country, hate of the American culture, hate of Western values, hate of Israel, hate of Christianity, hate of wealth, and – dare I say it – hate of each other.

Identity politics is first and foremost about hatred of the other, and identity groups only band together in a sense of ‘the enemy of my enemy is my friend’. I could show you some Bible verses about that.

To live with Christ, one must try to live with love in their heart. That means looking past the frailties, insecurities, and imperfections of others, and embracing your empathy, compassion, and caring. To live with Christ, the only thing more important to you than your fellow mankind must be God. That, however, does not mean denying self, or denying one’s family, and it does not mean giving all one has to those who are needy by choice.  Being needy by choice is not even true need.  Is it greedier to keep what one has earned, or to refuse to earn what one is able to earn and to demand support from others?   Is it Christian to take from those who are truly needy out of a twisted sense of entitlement?

Sometimes, in addition to turning the stomach, one must also turn the heart. At that, none of us are as good as Christ, but we must try, and try Christians do – some better than others.

To deny the love and the charity of Christianity based on the sin of each individual Christian is to throw the baby out with the bath water. If we are to live with compassion and love in our hearts, we must do better.

As I think about it, this post does not go entirely off the reservation of libertarian thought, for our founding forefathers believed very firmly that a libertarian society needed to also be a moral society.  Christianity may not be the only source of moral character a person can follow, but the Christian model of loving your fellow mankind as much as you love yourself is not a bad place to start, and whether one finds a moral plane through Christianity, through another religion, or through any other source, morality is important for any functional society to survive.

There is no morality in hate, and one need not be a Christian to believe in love.