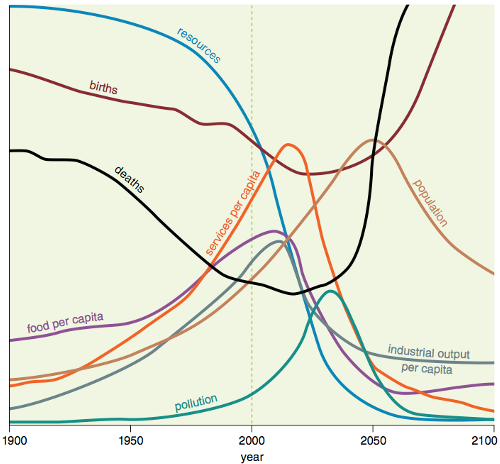 This is the most dangerous graph ever made.  It was created by the Club of Rome, whose membership has included such political heavyweights as David Rockefeller, Mikhail Gorbachev, Joseph Stiglitz, and Pierre Elliot Trudeau.

The Club of Rome was established in 1968, under the theory that as global populations rose, and as output per capita (industrial output, food production, and services) grew to supply that growing population, we would at some point run out of one or more vital resources, causing a massive economic collapse, and crashing both the world economy as well as the world population.

This graph has been circulating since 1968, and every time the Club of Rome predicts that we will run out of some critical resource – usually oil – and we do not run out, the Club of Rome just changes the dates at the bottom of the graph and tells us that the next time we will see collapse.

Jehovah’s Witness no longer knocks on my door…

Is the Club of Rome any different than Jehovah’s Witness?  They too have been predicting the end of time for some time, and their predictions bear no more scientific backing than does that debunked religion.  Time keeps passing, predictions fall, and here we are, carrying along as always.

What policy prescriptions does the Club of Rome have?  Simple:  we need a world government to manage every aspect of the human condition, ensuring that while everyone has enough to survive on, nobody has anything more than that.  Populations need to be tightly controlled, with government deciding who can have children, and how many children those people can have.  Those who are not given a quota to have children would be forcibly sterilized, and those given a quota would be sterilized once their quota was met.  The Club of Rome envisions a totalitarian, communist state, and they tell us that if we do not give it to them, billions upon billions will die, and those who survive will live lives of misery and starvation.  They give us a choice between slavery, and death, and tell us we are evil if we choose to ignore them.

Look at the death rate on the graph.  It’s pretty scary stuff.  Look at how resources just tank, and with them production of everything, including food.

Communist Russia was still alive and well in 1968, when the Club of Rome was founded, and many of the founding members were communists.  The Club of Rome created a moral argument to replace the failing economic argument for communism, such that rather than saying that communism works better (which even by 1968 was an untenable position to take, and by the 1990s was a complete joke), the argument became one of total world collapse unless communism was employed worldwide.  Whether or not communism works becomes irrelevant.  It is a moral imperative that we try!

The problem with the Club of Rome is that their basic premise is wrong.  There is no vital resource we are on the verge of running out of.  There is in fact enough oil to supply the world for the next 1,000 years (https://www.forbes.com/sites/judeclemente/2015/06/25/how-much-oil-does-the-world-have-left/#3203220a5b1f).  Note that we have even more natural gas than we have oil.  There is zero chance of us running out in the foreseeable future, and in fact production is climbing rather than falling.

The Club of Rome is wrong, and they always have been.  As economies become developed, birth rates drop and populations stabilize, and even go through periods of decline.  The world population is not going to skyrocket out of control, but is going to peak and then drop off some.  There is no need for dire predictions, but there are always going to be people who want to control other people, and they will always trot out graphs predicting the end.

The Club of Rome is not the only group making dire predictions.  Climate Change Alarmism falls right along the same lines, and is also designed to provide a moral argument for totalitarianism where economic arguments fail. It is interesting to note that one of the early Club of Rome members was former Prime Minister of Canada, Pierre Elliot Trudeau, the current Prime Minister of Canada’s father.  Justin Trudeau has not fallen far from the tree and is doing everything he can to destroy the Canadian economy, using climate alarmism as an excuse (http://thedailylibertarian.com/canadian-climate-tyranny/).

Is ours a future of freedom and relative abundance, or of totalitarianism and misery?  We can debate that question logically, or we can debate it on purely moral grounds.  The left is increasingly pivoting to moral arguments, saying that the ‘debate is over’, and writing ridiculous articles, like the following from Huffington Post, that state that disagreement with them is simply a sign of evil that must be ignored and perhaps even punished.

To the left, the debate is over.  They are going full speed into totalitarianism and despair, and if we do not go along, we ‘do not care about other people,’ and are evil for getting in the way of those who do.  Never mind that many of the policies the left wants will not give them the results they ask for.  Huffington Post for example says that conservatives are evil for fighting the minimum wage.  We don’t reject the notion of helping the working poor at all – we just recognize that the minimum wage is the wrong tool (http://thedailylibertarian.com/case-minimum-wage/).  The left, however, is carefully, and creatively, changing the base of the argument from one of cause and effect, to one where the correct policies are a given, and where any argument to the contrary is immoral.

We need to also change the nature of the debate.  It is no longer sufficient to say that climate alarmism isn’t supported by the facts.  We have to go further, showing that the solutions the left wants will destroy the world economy, causing misery and starvation.  It is no longer sufficient to say that socialism does not work.  We have to point it out as the dystopian hellhole it is.  It is no longer sufficient to point out that peak oil is a myth, and that the Club of Rome is wrong.  We have to point to the virtue of living in a free country, where we can live our lives as we wish, and we have to point to the great evil of those who wish to take our freedom away from us.  This is a choice between totalitarianism and freedom; between misery and relative abundance.  One side in the debate truly is evil, and we need to call them out.