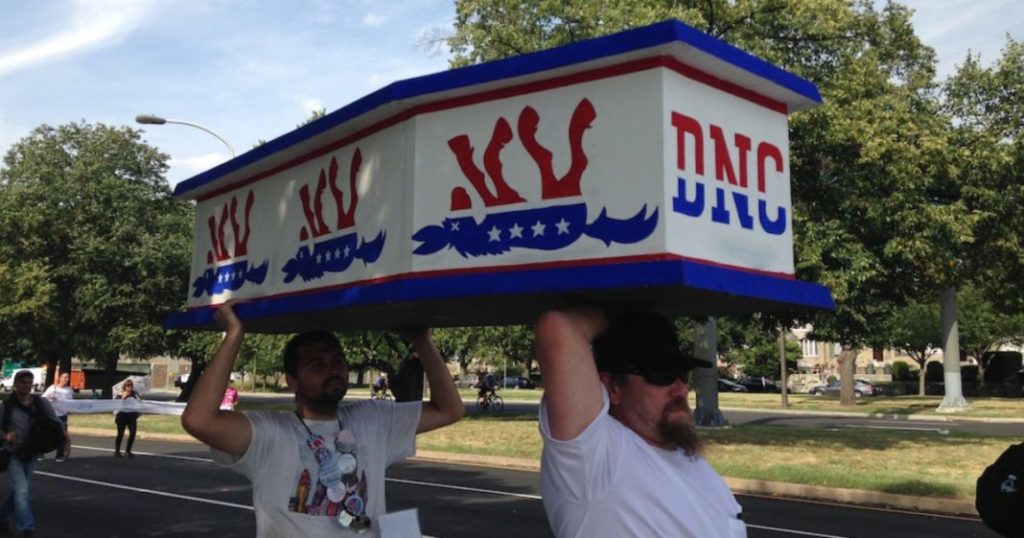 Here is what we now know, in a nutshell…  Barrack Obama and Debbie Wasserman Schultz left the Democrat National Committee with no real fundraising capacity, with $24 million in debt, and without any ability to pay it’s monthly bills.  As the 2016 primary season started, the DNC was bankrupt, and with it, so too was the Democrat Party.  Hillary Clinton worked with her Super PAC donors (the ones she is not supposed to have any involvement with), and paid off 80% of the DNC’s debt.  Hillary Clinton also arranged for her Super PAC donors to put the DNC on life support, giving it just enough money every month to cover it’s bills and avoid bankruptcy.   In return, the DNC reported directly through the Hillary Clinton campaign, and was run by Hillary Clinton.  Hillary Clinton rigged the primaries, and also took virtually all of the DNC funds earmarked for other candidates, leaving them with insufficient funds to run their campaigns effectively.  The result?  Democrats lost the Presidency, the House of Representatives, the Senate, and a slew of state governments.  Hillary Clinton did not just lose her election; she caused losses up and down the Democrat board.

And the message to the rest of the Democrat Party is clear: screw you – nobody cares what you want.

There is a temptation to shrug much of this off.  With the exception of possible collusion between the Hillary Clinton campaign, the DNC, and Hillary Clinton’s Super PACs, nothing illegal occurred, and the end result of the Democrats cheating was that they lost.  The collusion with Super PACs was illegal, but 2016 was not Hillary Clinton’s first election so it is very unlikely she left enough evidence to indict her.  Hillary Clinton should be thoroughly investigated, and this should be a part of that investigation, but I for one would be very surprised if there is enough evidence to convict her of a crime.  But never mind criminality.  The real story is deeper than that.  Think of the name of her political party: Democrat.  The very name implies a commitment to Democrat principles, which means accepting the will of the voters, in both the primaries and the general election, and then abiding by the outcome of the election.

It wasn’t just the primaries that were rigged.  We know from e-mails in WikiLeaks that the mainstream media was working in collusion with the Hillary Clinton campaign and the DNC during the general election.  Not only that, but the primary reason Democrats have given not to accept a Donald Trump victory was based on the specter of possible collusion between the Trump campaign and Russia.  How far are the Democrats willing to go?  ANTIFA, the darlings of the left, have promised to start a civil war tomorrow (November 4th), to bring down the Freedom of Speech.  ANTIFA are communists, actively working to create the Union of American Socialist Republics.

No evidence has emerged showing any collusion between the Trump campaign and Russia, but there is a mountain of evidence proving that the DNC and the Hillary Clinton campaign colluded with Russia (and other foreign powers) to influence the election.  Hillary Clinton and the DNC paid a legal firm, to hire a corporation, to pay Michael Steele – a British Spy – to bribe Russian officials to give any dirt they may have had, or might want to make up, on Donald Trump.  The supposed information Michael Steele got was never verified, and ‘informants’ within the Russian government were paid without any attempt to make sure that whatever they were saying was true.  Furthermore, the more outrageous the allegations Russian officials made against Trump, the more money they were given.  There is no reason to believe anything in the dossier, based on how it was made, but it’s creation does represent foreign collusion with at least two foreign governments: Britain, and Russia.  What are we told about this?  That we should continue to investigate Donald Trump.  Fine – investigate Donald Trump, but investigate the entire Hillary Clinton campaign, and the entire DNC while you are at it.  Investigating Trump in the hope that he might be guilty of something seems somewhat of joke when we are not investigating Hillary Clinton, and the DNC, whom we know to be guilty.  If the Department of Justice really wanted to be thorough, it could throw RICO at the Hillary Clinton campaign and the DNC.  Doing so would permanently kill the Democrat Party.

Let’s talk about sexual assault and sexual harassment.  Donald Trump had hundreds of court cases pop up against him during the run-up to the general election, and news coverage was constant.  As soon as the election was over, virtually all of those court cases were dropped.  This tells us that Hillary Clinton and the DNC had women creating false allegations against Donald Trump, with the sole purpose of creating media coverage.  Talk about fake news!  Now – there are other allegations against Donald Trump, and some of those may or may not be valid – but there is no question that the DNC and Hillary Clinton campaigns utilized our court system as a part of their campaign’s smearing of Donald Trump, and they did this with the full overt help of the mainstream media, which, according to WikiLeaks, was taking it’s marching orders directly from Hillary Clinton’s Campaign.

How much of Hillary Clinton’s campaign centered around Hollywood moguls endorsing her and giving her donations?  And now Hollywood is embroiled in a huge sexual assault scandal.  You don’t see Republicans in Hollywood being accused of anything – it’s all Democrats.  In fairness, the people accused in Hollywood deserve an assumption of innocence (as does Donald Trump), but the allegations of sexual assault in Hollywood are so bad, and so widespread, that it screams for a federal investigation.  Incidentally, if you would like to see an investigation, you can sign a petition at the bottom of the article here.

It should be clear by now that nobody in the DNC or the National Organization of Women really cares about sexual assault or sexual harassment; they care only about political power, and are happy to overlook sexual harassment and sexual assault as long as the people committing that assault vote (or donate) the way the DNC and the National Organization of Women wants.

Wake Up America!  The DNC is not only financially bankrupt, but morally bankrupt as well.  There is nothing democratic about the Democrat Party, and they have proven themselves guilty of everything they accuse others of being.

And with that, I can answer my Twitter question to Hillary Clinton for her: How much did the DNC cost to buy?  I don’t have an exact number, but it clearly cost far more than it was worth…

The DNC, and the Democrat Party, are dead.