Illegal immigration is one of America’s hottest political issues.  Ironically, most people, including most of the people on TV, don’t seem to know much about it.  It is time to drop some truth-bombs about our Southern border.

Under Obama, families detained at the Southern border were generally released into the population, with a hearing date a large percentage of them would not show up for. When Trump began detaining families, one of the things border patrol discovered was that many of the children coming across the border in family units, were not the children of the people taking them across the border.

The cartels in Mexico had created markets where children were rented to people who wanted to cross the border, under the guise that families are more apt to be released, then are people coming across without children, into the general population.  After the fake-parents got into the country, the children were smuggled back across the border, to be used again.

Obama’s policy was turning a blind eye to illegal child trafficking by the cartels. Trump’s policy addresses this trafficking, which in turn creates a new problem where we now have thousands of children, whose parents, if they are alive, are in other countries.  We have no idea who the parents of these children are, nor where they are, and have to work with foreign governments to try and find those parents.  In the meantime, we have to take care of these children, often through foster care.

It should be a no-brainer that children who have been abducted need to be returned to their parents (as difficult as that process may prove to be), but what does the Mainstream Media report?  That the Trump administration is separating families, and holding children in cages.

The truth, of course, is that our border agents are being as humane as possible, under very difficult circumstances.  Holding parents for several days, while they await hearings, also means holding children.  That much is true.  Democrats, however, refuse to accept holding parents with their children, and they also refuse to accept holding children separately from their parents.  In other words, the left does not want us to hold children at all.  The only option the left will accept is that of releasing those with children into our population, in spite of the fact that many of those children are not with their parents. 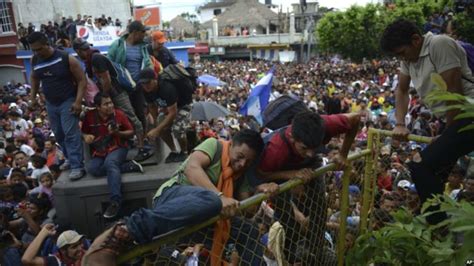 As if a child slave-trade were not bad enough, liberal open-border groups are organizing, and financing, giant caravans, that march toward our borders in the hope of overwhelming local border facilities.  This forces our border agents to create temporary holding facilities, which are often not as plush as the permanent holding facilities.

The Democrats, backed by a mainstream media that refuses to show all of the facts (and that misrepresents the facts they do show), will only accept one option: release anyone crossing with children into our population.  The fact that this leads to child trafficking is something Democrats do not care about.

What Democrats do care about is illustrated in another, related issue: asking about citizenship, and immigration status, on the US Census.  Democrats are fighting these questions tooth and nail, for one reason alone: it would reduce the number of members in the House of Representatives, primarily in left-leaning states.  California alone would lose an estimated eight House seats, if we asked these question on the US Census.  Why?  Because illegal aliens would not be counted.

How does it make sense to give free healthcare, and free college, to people who entered the country illegally, while denying the same benefits to those who entered the country legally?  I’ll answer that.  These policies act like magnets, attracting illegal aliens to liberal states, and since the US Census does not currently ask whether or not someone is in the country legally, left-leaning states can increase their representation in the House of Representatives by attracting illegal aliens into their states.

Every border security agent I have ever heard speak on the question of a national emergency on the Southern border, says we have one.  I’m not convinced that this gives Trump the legal authority to build walls without congressional approval, but certainly Trump does have the authority to deal with the emergency.

The left is intentionally lying to us about immigration, and the media is helping them do it.  To the degree that there is a border emergency, it was created by the left, as a political tool.

We conservatives need to hold the left, and the mainstream media, accountable.  Remember that come 2020.

Edit: This article previously used a statistic several Republican House members, and the President, have been using: that 90% of all immigrant families released into the population fail to show for their asylum hearings. The actual number is 40%, and while that is still very large, it is not 90%, and this article has been updated accordingly.