What do you get when you allow government workers to unionize, and you allow unions to give campaign contributions to the people they negotiate contracts with? 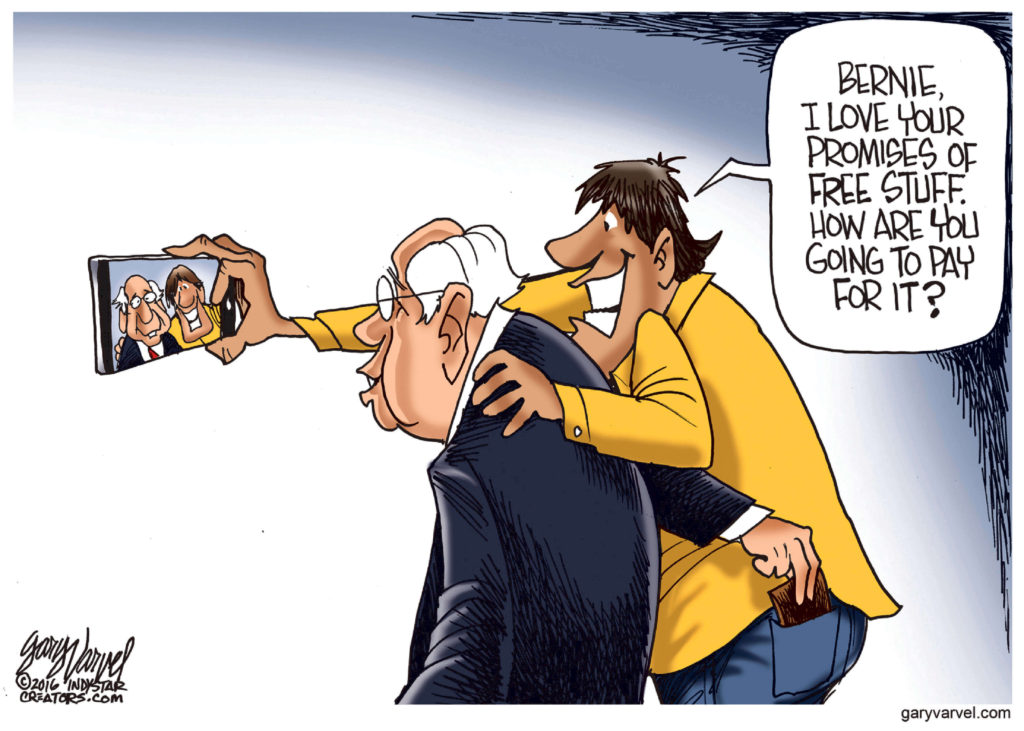 Double that, and you can include the national debt.  You owe the government $125,926.  A family of four owes the government $503,704.  On top of that, you still have to pay taxes every year, and if you total all of the taxes you pay at the federal, state, and local levels (including sales taxes, excise taxes – everything), it comes out to 40% of your income (http://newsroom.ucla.edu/stories/taxes-are-much-higher-than-you-241741?link_page_rss=241741).

Median household income, in the meantime, is $59,000 (https://fred.stlouisfed.org/series/MEHOINUSA672N).

Now add on all of the state and local debt.  Do you live in New York, California, or Illinois?  In those states, the average family would have to borrow just to pay what it owes government.  The payments in those states would be more than the median household even makes.  How is that for being bankrupt?

That is what your government does for you!

The actual government pension part of all this is $7 trillion a year in unfunded obligations.  The average American ‘only’ owes $21,604 for that, which for a family of four comes out to $86,420.  That’s a far more manageable monthly payment of $404 (paying it off over 30 years), or $4,848 a year.  And that bill is due – government workers want their pensions.

I could get into the fairness of taxing households (many of which have more than one worker) making an average of $59,000 per year to pay government workers an average of $51,340 a year.  If a family has two government workers, they cost $102,680 a year – paid by a family making, on average, about half that.  Is that fair?  It’s hard to tell when looking at household incomes on one side, and individual incomes on the other.  An applies to apples comparison would look at median personal incomes in the private sector against median government worker incomes.  Luckily that has been studied, and the answer is that our government workers make out far better than do the rest of us (https://www.cbsnews.com/news/does-the-government-pay-more-than-the-private-sector/), and no – that is not fair.  This article is not about fairness though.  This article is about numbers, so we’ll move on…

It is worth noting that while each American may owe money to repay government obligations, only the 127.35 million of us actually working will ever be asked to repay anything (https://www.statista.com/statistics/192361/unadjusted-monthly-number-of-full-time-employees-in-the-us/).  Those who never work never pay, receiving welfare benefits paid for by non-government workers instead.  Because only a little less than half of Americans at any given time are working, you can take all the debt numbers above and double them.  As bad as they sounded before, it’s actually twice that bad.  And it’s actually even worse than that, as many of the 127.35 million workers in our country work for government.

If I looked only at what non-government workers would have to pay in order to cover our nation’s obligations, you would understand why we can’t balance any budgets at any level of government.  Put simply, ‘we the people’ don’t make enough money to fund all of it.  Our government has gotten so big, so generous (with government workers and welfare recipients), and so bloated, that the only way it can pay its bills is to take from the people everything the people can afford to give – 40% of our incomes – and then to go further, and further, and further into debt.

Bernie Sanders has a solution.  We can give everyone free college, free healthcare, and various other free things.  Bernie is great – he’ll even give more to welfare recipients.  We can’t afford the government we have, so Bernie tells us the problem is that government is not big enough.  Apparently Bernie has never heard of math.

Personally, I’d tell them that I want the discount package, that only includes roads, police, fire protection, national defense, and other vital services.  I’ll give them 20% of my income, and they can keep the unnecessary regulatory burdens, the mandatory diversity training at all public colleges, the indoctrination part of our public schools, and the rest.  They can layoff most of their employees and focus on good governance rather than always focusing on more governance.

Now – let me be a salesperson for just a moment.  If I promised you a federal government that does only those things specified in the Constitution, and state and local governments that are also limited to their proper roles, and I could deliver it for 14% of your income – putting 26% more of what you make back into your pocket – would you take it?  Would you sacrifice all of the bloat and excess of our current government, if doing so meant keeping another 26% of everything you earn?  I can promise that – the solution is outlined HERE.

When we have the next election, and really, when we have any election, remember these numbers.  Government pensions, and more to the point, government excess, is expensive.  Much of our government obligations are unfunded, and the bill is coming due.

Edit:  Federal Government Employee Unions are not legally allowed to bribe the people they are directly negotiating with.  That is a problem at the state and local level.  Note however that federal unions can and do bribe everyone else, including Congress, to pass laws that benefit them.  Also note that there are many times more workers in state and local governments than there are at the federal level.