I had an interesting debate on Modern Monetary Theory (MMT) with several MMT adherents recently, and as the debate progressed, I was told, over again and over again, how little I know about economics.  I suddenly realized something: the people with whom I was discussing MMT had never studied any form of economics outside of post-Keynesian economics, and were gauging MMT solely based on the theoretical school of economics from which MMT springs.  These people would tell me how little I knew, but when I described post-Keynesian economics back to them, and MMT in particular, they could not tell me what about post-Keynesian theory I was getting wrong.  Their arguments were functionally no different than taking the Bible as fact, and debating the legitimacy of Christianity without allowing any sources other than the Bible, or doing the same thing with Islam, allowing no sources other than the Koran and other Islamic texts.  Theirs was the perfect circular argument, only they were blind to the fact that their arguments were based on circular reasoning, as they were unwilling to gauge MMT in ways that did not assume the validity of post-Keynesian economics, if they even understood post-Keynesian economics themselves. 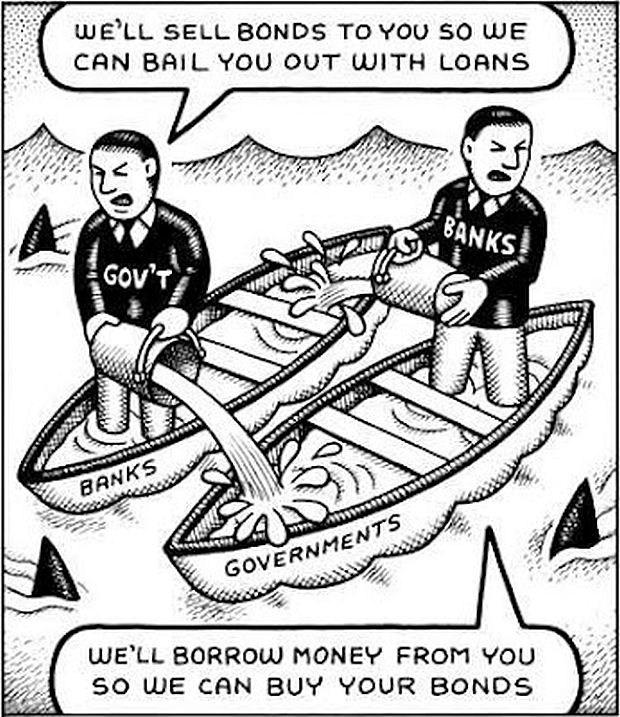 Post-Keynesians stand Austrian and Chicago school economics on their heads.  Both the Austrian and the Chicago school believe that supply and demand always move toward balance when left alone, and that the most efficient way to manage an economy is to stay out of its’ way, and let it find balance on its own.  Post-Keynesians also believe that supply and demand should balance, but they believe the natural balance supply and demand find on their own is sub-optimal, so we need government to create balance by manipulating supply and demand to their optimal points.  To the post-Keynesian, the only limit to what government can spend is demand, and as long as there is demand for everything government spends money on (or gives money away to let the people spend it on), there will be no inflation.  Taxes are simply a mechanism to smooth things over should government spending exceed demand.  Taxation, to the post-Keynesian, is nothing more than an emergency brake.

One root problem of post-Keynesianism, and by extension MMT, is that it is not descriptive, but prescriptive.  MMT adherents like to claim that theirs is an accurate description for how inflation, the money supply, and the Federal Reserve all work, but theirs is not descriptive of these things at all.  Rather, MMT describes how post-Keynesians would like inflation, the money supply, the Federal Reserve, and related things, to work.  It is somewhat dangerous to build an economic system around the world the way one wants the world to be, instead of around the world the way the world actually is, yet this is what post-Keynesianism wants to do.

The real world is not driven from the top down, but from the bottom up.  The basic building block of any society is the individual, and their immediate family, and it is the needs and aspirations of the individual family around whom all production and consumption occurs.  Each individual worker, works to support their family, of which they are a part.  The incentive to produce is based on the need to provide, which is inherently driven by profit.  Every worker profits from their work in the form of pay, and each company profits based on how well it can build goods and services that meet the needs of others.

Inflation is not driven by government spending, so much as by growth in the M2 money supply, which is the money supply after banks have expanded it through fractional lending.  Government does not really control fractional lending.  Lending, rather, is controlled by market forces, and while government can manipulate those forces, those manipulations become less and less effective as we move from the short, to the long term.

MMT abstracts over these facts by telling us that government can not go bankrupt, as it can always print more of its own currency, and can enforce value in the currency by forcing people to pay taxes in that currency.  There is some truth to this – government cannot go bankrupt, and government does force us to pay taxes in the currency they produce.  What government cannot do is to adequately enforce the price of butter, or milk, or gasoline, or any other commodity.  Government also cannot adequately control how much people need to charge before they are willing to cut someone’s hair, mow their lawn, or perform any other service.  Government can try to control these things with price controls, but if government sets a price too high, or too low, we get shortage and surpluses.  Price controls also lead to black markets, where people can buy and sell goods and services at prices that better reflect their value in the real world.

Government can tell stores that if they sell a loaf of bread, it must cost X number of dollars.  What government cannot do is to force someone to make bread for the store to sell.  The only answer MMT has for this is to set a higher price for bread and then to print more money.  Anyone who does not see how this can lead to hyperinflation is delusional.

Roman Emperor Nero was the first to play with fiat currency.  The Roman Denarius was made out of pure silver, and was stamped by the state as testimony of it’s purity.  Nero reduced the silver content to 94% silver, and then to 85% silver.  Emperors after Nero continued to devalue the Denarius until it contained only 0.02% silver, and was essentially a fiat currency.  The fact that the Romans paid their legions with the Denarius (and that many of their legions were filled with non-Romans) contributed mightily to the downfall of Rome.  The Visigoths were not foreign invaders so much as Roman legionnaires, who had been trained by Rome and fought for Rome, who quit when the currency they were paid in was no longer worth enough to feed their families.  The Visigoths decided that if Rome would not pay them with something of value, they would march on Rome and seize payment in gold.

Fiat money has been tried countless times since the time of the Roman Emperors, and always with the same result.  MMT is nothing but a naïve attempt to try again what has failed miserably so many times in the past, and the fact that many people today view MMT as a solution should scare the bejesus out of everyone.

Post-Keynesian economics is not based on science, and has no real grounding in the rational, physical universe.  There are several mathematic models supporting MMT, but they are purely theoretical.  Like models supporting string theory, the models supporting MMT are completely separated from anything tangible.  MMT, as a mathematic construct, cannot be tested in the physical universe, and as such, even though the math behind it is elegant, that elegance is purely circular, and separated from reality.  MMT can tell you that the government can always print more money to pay whatever bills may emerge, but it cannot tell you how much a gallon of milk will cost, or how much the kid down the street will ask for to mow your lawn.

Post-Keynesian economics is not scientific at all.  It is far more like a religion.  It’s adherents are its followers, and its practitioners are its priests.