Taxes are one of the least understood, and yet most discussed, topics in our country, and with the Republicans promising tax reform, this is a subject that needs to be better understood. 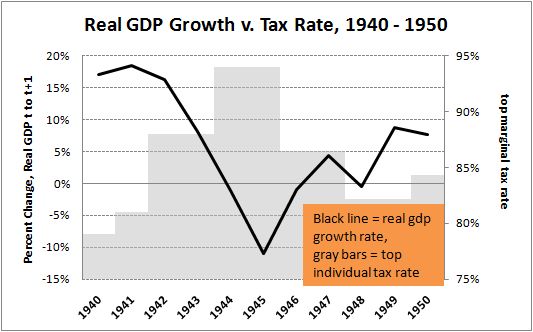 The government does not control how much money someone needs to support their lifestyle, but the government does control how profitable it is to leave money overseas.  If tax rates are low enough, rich people can earn more money investing in the stock market than they can earn parking money in low interest-earning banks overseas.  When tax rates are too high, rich people make more money keeping their income overseas, and they respond accordingly.  Those, like Bernie Sanders, who want to ‘stick it to the rich’ with ever higher rates, don’t understand that the high rates they ask for lead to income being parked overseas, creating less, rather than more, tax revenue.

When John F. Kennedy reduced the top marginal tax rates in 1964, the amount of income being reported above that rate exploded, as rich people moved more of their money from offshore accounts to the stock market.  Tax revenues doubled.  When Reagan reduced taxes the first time, we saw the same effect – the amount of income being reported in the top brackets exploded and revenues doubled.

Obviously, if tax rates are too low, government receives less income.  Is it really so surprising that if rates are too high, this too reduces tax revenues?  This effect is known as the Laffer Curve, after Arthur Laffer, who wrote the concept on a napkin during a business dinner with Ford executives, Dick Cheney, and Donald Rumsfeld.  Laffer himself did not create the Laffer Curve – the concept was first written in the ‘Muqaddimah’, by Ibn Khaldun, in the 14th Century, who noted, “It should be known that at the beginning of the dynasty, taxation yields a large revenue from small assessments. At the end of the dynasty, taxation yields a small revenue from large assessments.”  Khaldun was noting that when rates were low, revenues were high, and as rates were increased, revenues dropped.  John Maynard Keynes, incidentally, believed in this concept as well.

People are libertarian for one of two reasons.  Either they believe that any government activity going beyond libertarian ideals is immoral, or they simply believe that libertarianism works as a practical model.  I believe in libertarianism as a practical model.  You will never hear me say, “Taxation is theft,” but you will hear me say that tax policy should be set to raise as much revenue for government as humanly possible, over the long term.  From a practical perspective, the Laffer Curve says that this maximum-earning point is lower than most people think.

We need taxation to earn as much revenue as possible over the long term, and that means economic growth is important.  Those who say that government drives growth are referring to Keynes’ belief in a multiplier effect from government spending.  I agree with the multiplier effect myself.  Keynes was right – when government spends money into the economy, it goes into the hands of those who receive it, who then either invest it or spend it,  making it available for others to either invest or spend it.  Each dollar is spent multiple times, creating a multiplier effect.

Note too that money left in offshore accounts is not spent in the US economy, and does not contribute to economic growth.  High tax rates are a double-whammy.

A third effect of tax policy is to modify behavior away from what is most economically efficient, and toward behavior that is less economically efficient.  If we had no tax deductions at all, but rather we had different tax rates for different income levels and everyone actually paid those rates, supply and demand would more closely align, and our economy would run more efficiently.  When we use tax policy to, for example, subsidize electric cars, more electric cars are sold, but more money ends up going into cars than otherwise would.  The effect is that less money goes into other things.  With corporate taxes, we have the highest tax rates in the developed world, but there are so many ways around those rates that our largest corporations often pay some of the lowest taxes in the developed world, after deductions are taken into account.  Not only does this move corporate behavior away from more efficient activities, and toward less efficient activities, but it also favors large corporations, who can afford to chase the tax deductions, at the expense of smaller competitors.  The result is that the United States has, for the first time in its history, more businesses being closed than being opened (https://www.washingtonpost.com/business/on-small-business/more-businesses-are-closing-than-starting-can-congress-help-turn-that-around/2014/09/17/06576cb8-385a-11e4-8601-97ba88884ffd_story.html?utm_term=.dc06768267bd).  Small businesses have traditionally been the economic bedrock upon which our economy is built.  Having businesses close at a faster rate than they open is an alarming trend, and one of the primary culprits is our tax system.

Will the Republican tax plan maximize tax revenues over the long term?  Will it reduce rates while eliminating deductions, such that more income is taxed at the rates specified?  Will it reduce the top rates to levels that encourage the richest among us to realize all of their income, such that they pay taxes on it?  Will it reduce the incentives to spend money less efficiently?  We shall see.  So far the Republican plan is high on promises and low on details, and special interest groups have a literal army of lobbyists pressing Congress to keep our tax system broken.  What is clear is that the American people need to understand tax policy better, our understanding of tax policy being the best counterbalance to the power of special interest groups over elected officials.  The more we know, the more it costs to buy our elected officials, and though we can not make lobbying go away, we can make it exponentially more expensive.

Tax policy really isn’t that complicated.  We need government to do certain things, but the more of our economic output we devote to government, the less we have for everything else.  We want a government that does the right things, and we want it funded adequately to do those things well, but we do not want it spreading its tentacles into parts of the economy where it does not belong.  People forget sometimes that an economy is not an engine, but is something far more organic – the composite of all human interactions that occur every day, as all of us live our everyday lives.  The more freedom we have to live our lives as we see fit, the faster the economy grows.  Government, and the taxes necessary to support it, are like salt: a little goes a long way.