The religion part of the First Amendment reads as follows:

Congress shall make no law respecting an establishment of religion, or prohibiting the free exercise thereof

The definition of religion follows:

A set of beliefs concerning the cause, nature, and purpose of the universe. 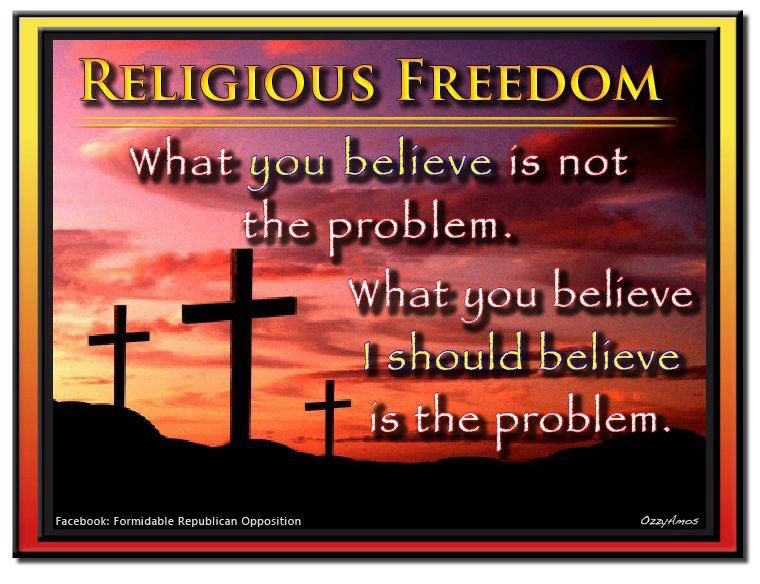 The First Amendment is not very popular today.  Most college students would like to see the first amendment’s Freedom of Speech repealed (Washington Post Article), and half of all Americans believe the Freedom of Religion is under assault as well (Huffington Post Article).  With respect to the Freedom of Religion, we are in danger of flipping it on its head and creating a freedom from religion.  People often forget that atheism too is set of beliefs concerning the cause, nature, and purpose of the universe, and that by restricting the free practice of religion on state grounds or in state activities, the government risks making atheism the de facto state religion, in direct violation of the First Amendment’s establishment clause.

At the same time, some religions go beyond being just a set of beliefs concerning the cause, nature, and purpose of the universe.  There are some religions that look at very little more than the cause, nature, and purpose of the universe.  Buddhism comes to mind.  Christianity was created in Palestine, which was ruled by Rome with both a Roman and a Jewish government.  Christianity did not attempt to overthrow the existing order, but instead focused on how individual people should live their individual lives within the existing social order.  Where people use Christianity to try and push for political change, we should be clear that political goals are not covered by the freedom of religion, but while Christians can be very political as people, the actual religion they follow is not.

The Koran makes the claim that only Allah can make laws, making the Koran not only a religious text, but also a political text.  To the true adherent, all laws made by people, including the U.S. Constitution, are null and void; every law that will ever exist is in the Koran and the Hadith, and it is the mission of the faithful to enforce those laws.

Note that the Koran and Hadith are in direct violation of the First Amendment, for they establish religion as law, and make any violation of that religion punishable by death.  That’s not to say that all Muslims practice Islam this way.   Indeed, many do not, and those who view Sharia as a personal code of conduct, and Jihad as a personal struggle to live by Sharia, are practicing Islam in a way that is fully compatible with our secular society.  We should embrace those people.  Unfortunately, those who view Islam this way are also ignoring large portions of the Koran and Hadith.  The Koran alone commands the killing of infidels a total of 109 times.  The Hadith commands Muslims to kill infidels as well.  The Koran goes so far as to blame a lack of correct belief in Allah for all evil in the world, such that if all infidels and apostates could just be killed (or converted), there would be no poverty, death, sickness, or suffering of any kind, anywhere on Earth.  Killing apostates and infidels is a holy act of cleansing, according to the Koran, and the only thing better than killing an infidel is converting one.

I had a conversation with a friend recently who told me that Christianity is just as bad as Islam.  I debated the point for a while, and then suddenly it occurred to me how to make someone who really believes that Christianity is just as bad as Islam see the light.  “Imagine,” I said, “all of the terrible things that have ever been done in the name of the Christian God.  Imagine the Spanish Inquisition, the Crusades, every war ever fought under a Christian banner, everyone killed under suspicion of witchcraft – everything bad that has ever been done in the name of Christ.  Imagine all of that in all of its brutality.  Really put it out there, as bad as you can envision it.”  At this point I had the person’s attention.  “Now imagine,” I continued, “how much worse it would have been had Christ ordered Christians to kill.  Imagine what the Spanish Inquisition and the Crusades might have looked like had killing been a central part of the Christian message.  That’s Islam.”

I don’t know if I truly got through to that person, but they had no response.

If one truly wants to understand a religion, the best way to do so is to understand the person the religion models as the perfect human being.  Compare, for example, the teachings of Christ to the teachings of Muhammed.  I get sick and tired of hearing people who have never read either the New Testament nor the Koran telling me what Christianity and Islam are.  The worst thing someone can say about Christianity is that Paul called homosexuality a sin, and as such most Christians view homosexuality as sinful.  There is however no penalty given in the Christian Bible for homosexuality.  Paul simply said, “Don’t do that.”  Muhammed left very specific instructions for how to deal with homosexuals – you either throw them off the tallest building, or you pull a building down on top of them to crush them.

Christ had two rules: love God above all things, and love your fellow human beings as much as you love yourself.  Someone who lives by those rules is likely to be, overall, a good person.  Muhammed’s rules are far more specific, and far more grotesque.  In addition to ordering the killing of all non-Muslims (and all Muslims who do not practice Islam ‘correctly’), he also said that women are for having children while pre-pubescent boys are for sexual pleasure, and that if a woman is raped, it is always entirely her fault.  Being raped puts a stain on the family of the raped woman that can only be erased by stoning the rape victim to death.  There is no right under the First Amendment to practice those aspects of Islam, and yet according to the political side of Islam, Sharia is already on the books.  Sharia was enacted for all mankind around 1400 AD, and it is the responsibility of all mankind to either enforce Sharia, or die by it.  That is the true meaning of Jihad, and what we need to understand above all other things is that the first people political Islam wants to kill are Islamic people who do not support political Islam.

Muhammed said that even he had no guarantee of going to paradise.  Nobody, according to the Koran, is guaranteed a spot in paradise – including the most perfect human being ever to live (according to the Koran).  Because of this, when someone raised as a moderate Muslim decides to become a ‘true believer,’ and embraces the political side of the religion, after having lived what the Koran would call a sinful life, it is easy for them to believe that they have zero chance of making it to paradise.  Luckily for the new adherent, the Koran gives one way out: if one dies as a martyr while fighting jihad against infidels, they are guaranteed a spot in paradise, no matter how sinful their life may have been.  Radicalization is baked right into the text.

How is it that the same people who hate Christianity the most are also the people who support political Islam by claiming that it is no worse than Christianity?  We all support Islam when practiced in a way that is compatible with a secular society, and there are indications that the Crown Prince of Saudi Arabia may be acting to modernize Islam, such that in the future larger numbers of adherents will ignore the political side of the Koran.  That’s a very positive development, and one that could, in a generation or two, make political Islam a thing of the past.  Saudi Arabia has however in the past spent billions of dollars a year, not only educating its own people to be strict adherents of political Islam, but also spreading political Islam throughout the Sunni world.  How effective have they been in spreading radicalization?  Here is Ben Shapiro breaking it down.  It’s a six minute clip – give it a listen.  As you will see, it would be criminally negligent to ignore the political side of Islam when allowing people to immigrate here.

When we discuss religion as a nation, we need to be able to do so honestly.  It is not racist to question a set of beliefs, and it is not evil to object to a set of beliefs that go beyond looking at the cause, nature, and purpose of the universe.  When religions also dictate how to run society, society has a right to object, and particularly when dictates of a religion are incompatible with secularism.  The Freedom of Religion only covers actual religion.  When a set of beliefs go beyond religion, the First Amendment no longer applies.

9 thoughts on “Rethinking the Freedom of Religion”