You hear it all the time in politics: both sides have extremists, and the truth is somewhere in the middle on some mythical ‘middle road’ that takes the best ideas from both sides.  I’m here to tell you that this middle road is a myth.  It does not exist today, and has never existed in history.  The simple truth is that there are more than two sides, and there is no rational middle. 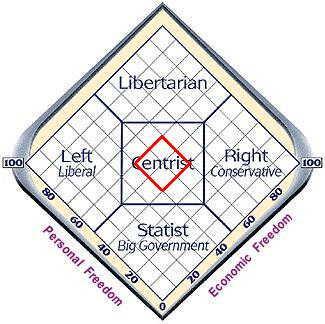 We all of course picture ourselves in the middle.  That is because we all believe we are in the correct position, and we look at positions of others from that perspective.  Very few people will admit to being extremists, and those who will are generally people one does not want to associate with.  For the most part, we all consider ourselves centrists and view others who also view themselves as centrists as being extremists, and though I have seen people who know they are extremists on TV, I have never personally met one.

A middle road would have to deny that there is any correct point on any of these axis.  If, for example, someone asks what the correct amount of government is, one can answer the question in an absolute, by defining a role for government in our lives, or one can simply ask for a direction of movement (more government, or less government).  Can you think of an absolute definition of government that is in the middle?  In all aspect of life, either we make our own decisions, as individuals and families, or government makes our decisions for us.  Is it a ‘middle road’ if government makes some decisions for us and allows us to make others?  If so, what decisions should government make, and what decisions should we make ourselves?  I challenge anyone to answer that question without sounding like an extremist to most Americans, and on the other side of the spectrum, as soon as you define limits to government, you are moving toward the right and will be considered an extremist to the left.

How about a middle road between pure democracy and dictatorship?  Pure democracy is a dictatorship of the masses, and no matter where one lies on this axis, they have to either define limits to government power, or government is unlimited.  If government is limited, it matters little how it is run, and it if it totalitarian, it will invariably be oppressive.  Once again, we are left with extremes.

How about the relationship between governed and government?  The middle road makes us vassals of the state, to at least some degree.  What level of serfdom is appropriate?  Any answer anyone gives will sound extreme to at least half the country.

We all, in our own minds, have a semblance of what we believe the correct role of government should be.  Some say there is no role, and call me a statist for supporting having a police force and a military.  I call them extremists, but they do not believe themselves to be extremists.  Rather, they think they are the enlightened ones, and that I, wanting a state to exist, am on the extreme.  Some say there is no limit to government’s role.  Indeed – the whole notion of a ‘living Constitution’ is one in which the limits of government are whatever the courts say they are at any given point in time, which is to say that there are no limits.  I believe in a government with a limited, defined role, and as such am considered an extremist by both extremes.

Either government authority is limited or it is not.  Asking for an ethical totalitarian government, or a principled totalitarian government, is still a call to totalitarianism.  Whose principles shall we use?  Whose ethics are important?  Hitler, Stalin, Mao – they all believed they were principled, ethical people.  It was an absolute belief in their own ethics and principles that allowed them to kill the hundreds of millions of people they collectively killed, and if the principles or ethics are not defined by the people in charge, then you are calling for a limited government and must define government’s role.  Any answer you give will make you look like an extremist to many other people.

There are a number of viable ways to define a limited government, but while they are all different, none truly represent a ‘middle’.  They all represent some ideology.  Each ideology is separate from others, and there are an infinite number of ideologies, none of which are ‘centrist’.

In a totalitarian dictatorship, is a call for ‘centralism’ considered ‘reasonable’, or is it a challenge to the authority of the state?  In a limited government, is a call for ‘centralism’ anything more than a call for ‘more’?  Really any call for centralism is a call for something between the status quo and one of the extremes.  I have never heard a self-proclaimed centrist say, “We went too far that way so let us go back a little.”  Rather, those who use the centrist argument always want to keep moving in whatever their desired direction is, well beyond what half the country would consider extreme.  Every direction becomes an extreme if you follow it far enough, and every point on every axis is an extreme to those who are on other points.

The only way to have both more government and less at the same time is to return to federalism, in which the federal government is restrained by an originalist interpretation of the Constitution, and each state is free to run its affairs however it sees fit.  Under federalism, each state would decide for itself how much, or how little, governance it wants, and each person could decide what state they want to live in.  There would be fifty ways to live to choose from (and perhaps even more than that), providing the only sensible way to make everyone happy.  Is federalism considered a centrist position?  No.  Federalism is considered by most to be an extreme position.

When the center is an extreme, there is no center, and in truth, there never was one.

3 thoughts on “The Myth of the Middle”