Skip to content
March 4, 2018 Wallace Garneau Leave a comment
A friend of mine, whom I will call 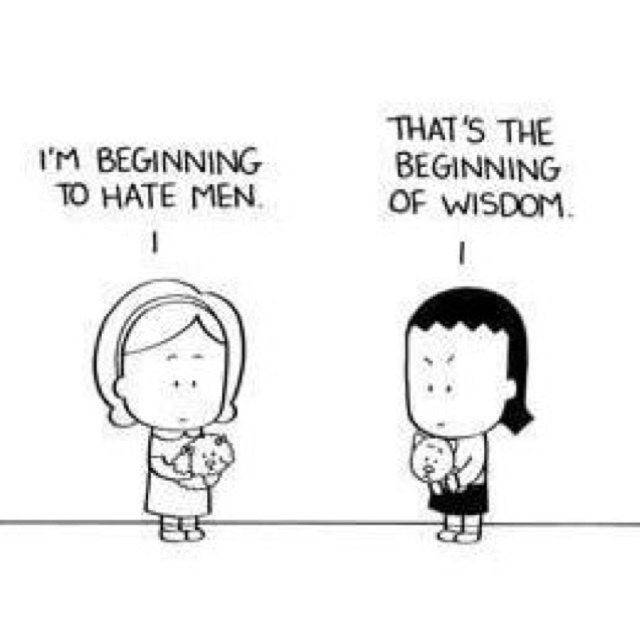 Dawn, posted what, to her, were startling statistics about men.  Dawn then asked what ‘we as a society have to do to protect society from men’.

One of Dawn’s statistics was that 52% of women who are murdered, are murdered by male husbands or partners.  Dawn has now blocked me, so I can’t ask her for sources, but I did find this article, on The Guardian, which says that 93.9% of all murders are committed by men.  The National Library of Medicine says that women commit 15% of all murders (significantly more than what The Guardian claims), but regardless, I have to concur with Dawn that men really do commit more murders than do women.  Dawn wanted society to act.

I was in a somewhat playful mood, and asked Dawn if it wasn’t silly to blame ‘men’ for the murder of ‘women’ when there is no such thing as a ‘man’ or a ‘woman’.  Who was Dawn, I asked, to assume the gender of either the murdered or the murderer?  Dawn knew I don’t really believe that (something Dawn often claims), so she told me if I could not give a serious discussion, she wasn’t going to talk to me at all.

I found it odd that when I parroted Dawn’s belief that genders are fluid, suddenly her belief changed; it seems that what liberals call ‘facts’ are even more fluid than what they call ‘gender’.  Regardless – Dawn was one of the few liberals I can generally have a rational conversation with, so I decided to tell her exactly why men are more prone to violence than are women.

In times past, boys were encouraged to channel their aggressive spirits through sports, and/or other forms of competition.  Women competed as well, but it was considered necessary for boys to do so.  Learning to channel aggression and strength into productive activities helped teach boys to become men.

Dawn is a lot younger than I am.  She is a millennial.  Dawn believes that our Western Patriarchy is the cause of most of the pain and hunger in the world today, and that the whole concept of men and women being in any way different is offensive (though she is quick to claim that men are worse than women in a whole myriad of ways).

Men used to be taught to have honor, courage, integrity, and a spirit of chivalry, along with compassion and empathy.  We were taught to hold our emotions in check, such that we can support others in times of need.  We were taught to be the pillars of our families, and to defend our families, as well as the honor of the women in our lives, against anything that might do them harm.  The boys of Dawns generation have been taught to have compassion and empathy, but that chivalry is sexist, and that the old concepts of honor and courage have to be modified to make them less masculine.  Masculinity has become a negative trait that must be destroyed.

Imagine being a boy who grows up believing that masculine traits are evil, while also always feeling those masculine traits within himself.  Liberalism is creating conflict within boys that there are only three ways to resolve: 1) become men anyway, understanding that the left will hate you for it; 2) suppress masculinity the way a Vulcan suppresses emotion; or 3) snap.  Is it really surprising that for many adult boys, choice two causes choice three?  If I am right, and the suppression of masculinity causes violence, one would expect men to be becoming more violent against women over time, as masculinity becomes more suppressed.  Sure enough, The Guardian (the same source Dawn got her statistics from) shows that rates of violent crime against women – committed in all cases almost exclusively by men – is rising.  Masculine men may get into fights with other men sometimes, but emasculated boys are far more apt to hit women.  Go figure…

I told Dawn that she does not need to be afraid of men, but that she should be very afraid of adult boys.  I also told Dawn that basing opinions purely on aggregate data, without digging into the details to determine what drives that aggregate data, can lead to dangerous, misleading conclusions.  I pointed out that 52% of all murders are committed by African-American men (who make up but 6.5% of the population), but that there are socio-economic reasons behind this number.  Using the 52% number out of the context of those socio-economic factors would be racist.  Likewise it was sexist for Dawn to throw out the numbers she was using, in the way she was using those numbers.  Dawn, sadly, was not looking for truth so much as for a justification for hate.

Dawn can block me.  That’s on her, and she is neither the first liberal who has done so, nor the last who will probably do so.  Liberals believe that they are on the moral high ground, and that those of us who question their narratives are vile, evil creatures.  Liberals are of course wrong in that assessment.  We, who value liberty, are the torch-bearers of the Enlightenment, with morality on our side.

Society is not responsible for creating equal outcomes.  Society is responsible only for creating an environment where there are no artificial barriers to advancement.  As long as we have equal treatment under the law, the choices individual people make is none of society’s business, and using aggregate statistics to single groups out for unequal treatment is morally and ethically wrong.

Those who look for differences in aggregate statistics, and then call those differences immoral, are themselves immoral, for they ignore the various factors that drive those statistics, and in doing so they lack the ability to accurately assess those differences, nor to solve them should a solution be necessary.  In the case of violence against women, the generational rise of such violence coincides directly with the teaching that masculinity is bad.  The solution is obvious:  it is time to be men again.

Gender is not fluid.  There are physical, biological, and emotional differences between the sexes.  That is not a political statement, but a biological fact, and those who take political positions that stand opposed to the biological makeup of the world population are not entitled to claim the moral high ground.  Hitler focused his hatred on less than 2% of the European population, and that rightfully put him on par with the Antichrist.  What do we say to today’s liberals, when they turn their hatred on half of the population?

This War on Men has to stop.

As always, if you agree with The Daily Libertarian’s message, please share our posts, using the share buttons below for whatever social media platforms you use.  Please also consider donating using the donation button on the top right of this post.  There is no advertising on The Daily Libertarian – we survive solely based on the generosity of our readers.  We also do not pester those who donate.  You can expect an e-mail thanking you for your generous donation, but we value your privacy and will not e-mail you asking you to donate again.