The best responses to this common liberal argument are 1) it is a textbook example of the ‘No True Scotsman’ fallacy, and 2) it is impossible to name any country that has ever become wealthy where the dominant forces were not free market libertarianism.  There may be no such thing as a true libertarian society, but people in countries that strive for libertarianism thrive.  The same cannot be said for socialism. 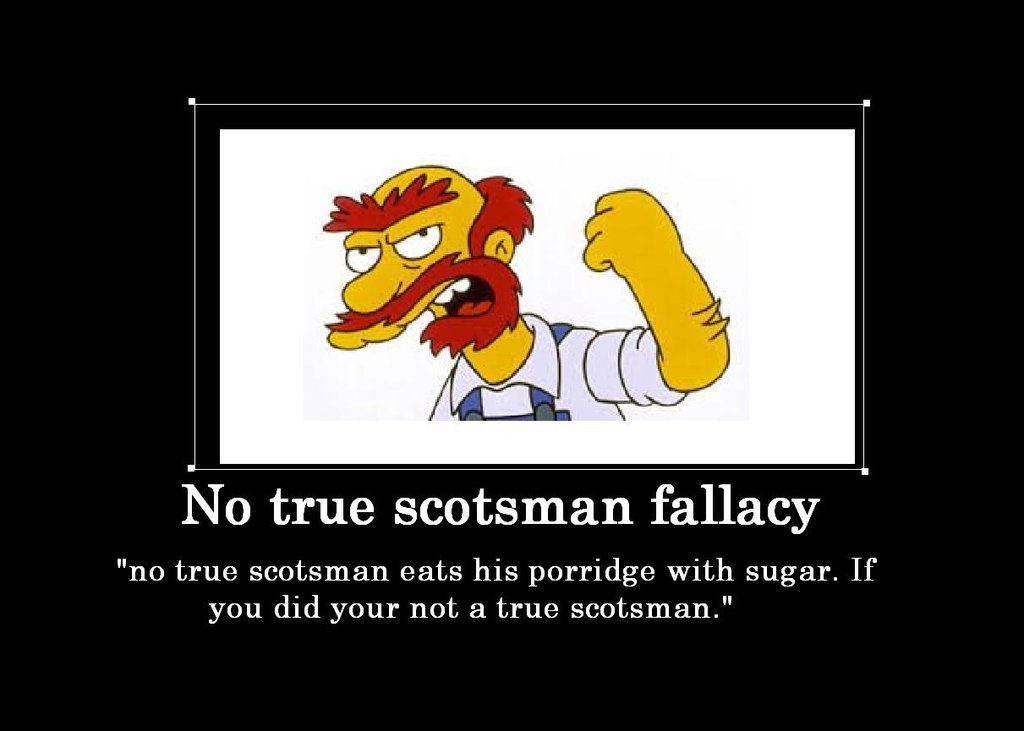 People are imperfect, and are incapable of living under any ideology at its most extreme, but that does not mean that all ideologies are equal.  Socialists would have us believe that societies are stronger when the people work together for the common good, and yet no country has ever become wealthy through collectivist means – ever.  Socialists would have us reject free market libertarianism even when no nation has ever become wealthy through any other means!

Socialists also use the ‘No True Scotsman’ fallacy whenever they try to show an example of socialism working in the real world.  When socialism fails, liberals say, “That was not true socialism,” and when pressed for an example of socialism working, they’ll name the Scandinavian countries.  Interestingly, the Scandinavian countries claim to be bastions of free market capitalism.  Denmark’s Prime Minister, for example, acknowledges that Denmark has a generous welfare state, but he also says that Denmark would be unable to pay for it’s welfare were it not a free market, capitalist country.

Even with free markets, the Scandinavian countries struggle to afford their welfare structures, and our Democratic Socialists want to have generous welfare systems without using free market capitalism to pay for it.  Think about that for a minute.

Never mind socialism.  Let’s talk welfare for a bit.  Is it possible to emerge as a wealthy nation, and then to stay wealthy under a welfare state?  Socialists again point us to the Scandinavian countries, but even here the best argument socialists can make is that these welfare states have not collapsed yet.  We know that there is a correlation between the homogeneity of a nation and the speed with which its economy falls apart under welfare, so it is hardly surprising that the least diverse nations on Earth would be doing better under welfare than have other nations that have tried the same things.  We can, however, look at Venezuela to see welfare falling apart very quickly; France, Spain, and Italy to see it falling apart more slowly; Germany and England to see countries struggling not to become more like France, Spain, and Italy; and other examples, all over the world, of nations that have been destroyed by welfare.  We can also see the Scandinavian cultures changing over time, as the younger generations are more apt to take advantage of welfare than were earlier generations.

The historical trends are undeniable to anyone who cares to look:

What do our Democratic Socialists ask for?  They ask for cultural diversity, generous welfare systems, and an end to free market capitalism.  What could possibly go wrong?

There is nothing wrong with having a diverse culture without welfare, as a free people dependent upon their own productive capacities will share values, no matter how diverse their culture may otherwise be.  Cultural diversity makes a nation stronger when that diversity revolves around shared cultural values, but when people begin to define themselves by what makes them different rather than by what makes them the same, diversity flips from being a glue that holds people together, to being a wedge that drives people apart.

The historical trends are undeniable to anyone who cares to look:

There is a huge difference between having good intentions, and achieving good results. Liberals spend too much time analyzing intentions. If they learned to analyze results, they would become conservatives.  How many on the left look at the morality of systems.  ‘Capitalism is not a moral system,’ they will say.  People like Fidel Castro are then held up as moral leaders, with complete ignorance of the actual suffering such people have made flesh and blood human beings endure.  Castro did not stop killing his own people until he died, and the same can be said of Mao, Stalin, Pol Pot, etc. etc. etc..

Is it more moral for food to wait for people, or for people to wait for food?  Is it better to have a national epidemic of obesity, or a national epidemic of starvation?  Since we know which system leads to what outcome, how can anyone claim to be both a socialist, and a moral person?  A nation can fight obesity with education, but it can’t fight starvation without food…

There may be no such thing as a ‘true Scotsman,’ a ‘true Libertarian nation,’ a ‘true Free Market economy,’ or a ‘true Socialist nation,’ but there are about seven and a half billion true people.  Perhaps rather than worrying about intent, we should worry about people, and should use systems that benefit flesh and blood human beings.  Free market libertarianism is the only system that works, and nothing can argue that fact away.

As always, if you agree with our message, we ask you to help us by spreading the word, with the share buttons below.