If you take any ideology to its logical conclusion, it will break. This is true of all ideologies, and Libertarianism is no exception.  There are, however two things that can break an ideology, as you stretch them to their logical conclusions, and some ideologies break sooner than do others.

Those ideologies that break first generally do so under their own weight, and even if people were not corrupt, those ideology would fail. Pure socialism (state ownership of the means of production, with central planning of the economy) contains no incentive system, and collapses in on itself.

Socialism fails not because people lack the virtue to live under it (though we collectively do lack that virtue), but rather, socialism fails before you even get a chance to test mankind’s collective virtue. Socialism fails because we all have our own values and interests, and socialism does not allow for those kinds of differences.

Under socialism, values and interests are imposed by the state.  For socialism to work, we would have to have a hive mind, and because of this inherent failing, it is impossible for pure socialism to work.  As a result, most of today’s socialists want to keep the profit incentive, which brings up another problem: as soon as you inject profit into socialism, you get fascism.   Modern ‘socialists’ generally looks more like democratic fascists than anything else, and I think we all agree that fascism is not very nice…

The best-case scenario for socialism seems to be the Scandinavian countries, but they are not socialist.  These countries played with socialism and got burned, and have been successful only because they recognized socialism’s failures early enough to move away from it.  Socialism has no success stories.  It has failed everywhere it has been implemented, and often with disastrous results.

All ideologies break, if stretched to their logical conclusions, but the ideologies that tend to work best are the ones that do not break until they run into mankind’s inherent corruption, which is to say that we are not, collectively, moral enough to live under them.

We can ask ourselves whether or not it makes more sense to try and ‘fix’ an ideology that does not work, even on its own, or to try to implement an ideology that only fails because of our corrupt nature, while baking in safeguards that protect society from our worst impulses.  Our founding forefathers decided to do the later, and we became the richest, and most powerful nation in world history, as a result.

Somebody is going to interject a third way, and suggest that we not deal with ideologies at all, but this is a fictitious choice, as any society must be built around some semblance for what a society should look like, or, in other words, an ideology.

It is, of course, easier to bake safeguards against immoral behavior, into a society that is already moral.  This creates a special problem for the United States, in that we are no longer a moral society.  If we cannot change course, historians from another age will eventually say that the downfall of the American Way of Life came from the belief that morals are malleable.

Malleable morals allow moral relativism to creep in, where suddenly the only ‘moral’ left is the belief that we should be highly tolerant of immoral behavior. Tolerance of immorality becomes the new ‘morality,’ which makes actual morality, immoral.

From there, it becomes very easy to decide that, since morals are malleable things a society can choose, so too are rights. The Bill of Rights is full of negative rights, which are rights that limit the government’s ability to control us.  Today’s left wants positive rights, which are rights to the labors of others – the right to healthcare, to food, to housing, etc., all of which require labor from others, to be produced.

If we all have the right to the labor of one another, then the government must have the power to force us to work for one another, which cancels out any negative rights. 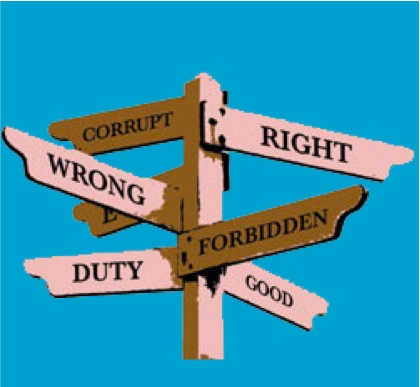 Mix in the fact that our society has been slowly changing from one that values hard work, to one that values victimhood, causing power to shift from those who produce the most, to those who complain the most. Production has become a sin, and sloth a virtue.

Victimhood, rather than morality, represents the political capital of the left, and in fact in many cases the morality of what someone does is based on who they are, more so than what they did.  Having different rules for different people used to be a pretty good definition of ‘Jim Crow,’ and yet today, that’s exactly what the left wants.

Of course, it was also the left who made Jim Crow – but that is another discussion for another day…

In the new American vernacular, if you do not champion victimhood and immorality, you are increasingly considered a ‘racist’ and a ‘Nazi,’ and at the same time we erase history so that people no longer know what phrases like ‘racist’ or ‘Nazi’ even mean.

The left does not care about definitions.  The left only cares about connotation.  If a word sounds bad, the left is more than happy to change the definition, in order to apply that word against the right.  The left often becomes the very things it claims to hate, in what has become a kind of ‘war on words’ (and though I have not, as of yet, written an article with that title, expect one soon).

Fascism, it’s cousin communism, and all other forms of totalitarianism, come from the left, always and forever.  The left, rather than the right, is the party of control, and it should not take a rocket-scientist to figure out that totalitarianism requires state control.

The only exception to totalitarianism coming always from the right, is that what is ‘right’ and what is ‘left’ in one society, may not be the same as what is ‘right’ and ‘left’ in another. Liberty is on the ‘right’ in America, because America was built on liberty, making liberty a ‘conservative’ value. Germany has a long history of socialism, going back to Otto Von Bismarck, who created the modern German state.  Because of this, socialism is ‘conservative’ in Germany, and libertarianism is ‘liberal.’

It should seem painfully obvious to anyone reading this that it is physically impossible for totalitarianism of any kind, to come out of an ideology based on the freedom of the individual, whereas it is impossible for individuals to be free in a society based on state control.

Forget the labels and focus on the ideologies themselves.  I don’t care whether you think libertarian values come from the ‘left,’ from the ‘right,’ or from the Great Pumpkin.  The fact is that, by and large, these values work, as long as we do not stretch them too close to anarchy.

There is a link between ideology and morality, and if we choose the ideology that is the most moral, we will choose libertarianism.  We will do so, however, without becoming ideologues, for all ideologies become dangerous when taken too far.

Our founding forefathers showed us the way.  We need only finish their job, by extending the values they gave us, to everyone in our country.

Abraham Lincoln provided a far better conclusion to this article than I could ever hope to write, so I will conclude with his words rather than my own.  You will recognize this as the Gettysburg Address:

“Four score and seven years ago our fathers brought forth on this continent, a new nation, conceived in Liberty, and dedicated to the proposition that all men are created equal.

“Now we are engaged in a great civil war, testing whether that nation, or any nation so conceived and so dedicated, can long endure. We are met on a great battle-field of that war. We have come to dedicate a portion of that field, as a final resting place for those who here gave their lives that that nation might live. It is altogether fitting and proper that we should do this.

“But, in a larger sense, we can not dedicate—we can not consecrate—we can not hallow—this ground. The brave men, living and dead, who struggled here, have consecrated it, far above our poor power to add or detract. The world will little note, nor long remember what we say here, but it can never forget what they did here. It is for us the living, rather, to be dedicated here to the unfinished work which they who fought here have thus far so nobly advanced. It is rather for us to be here dedicated to the great task remaining before us—that from these honored dead we take increased devotion to that cause for which they gave the last full measure of devotion—that we here highly resolve that these dead shall not have died in vain—that this nation, under God, shall have a new birth of freedom—and that government of the people, by the people, for the people, shall not perish from the earth.”

1 thought on “Ideology and Morality”