The Peter Strozk testimony has caused more confusion than it has provided answers, and there is a good reason for that.  The Inspector General’s office has already told us that though clearly Peter Strozk was heavily biased in favor of Hillary Clinton (and against Donald Trump), and that Peter Strozk made bad decisions that were consistent with that bias, there is no evidence that bias was the cause of those bad decisions.

The IG report was very clear that while there was no evidence that could prove that Strzok’s bias forced him to create bad decisions, the IG has no confidence in Strzok’s ability to make unbiased decisions regarding Trump and Clinton, either. 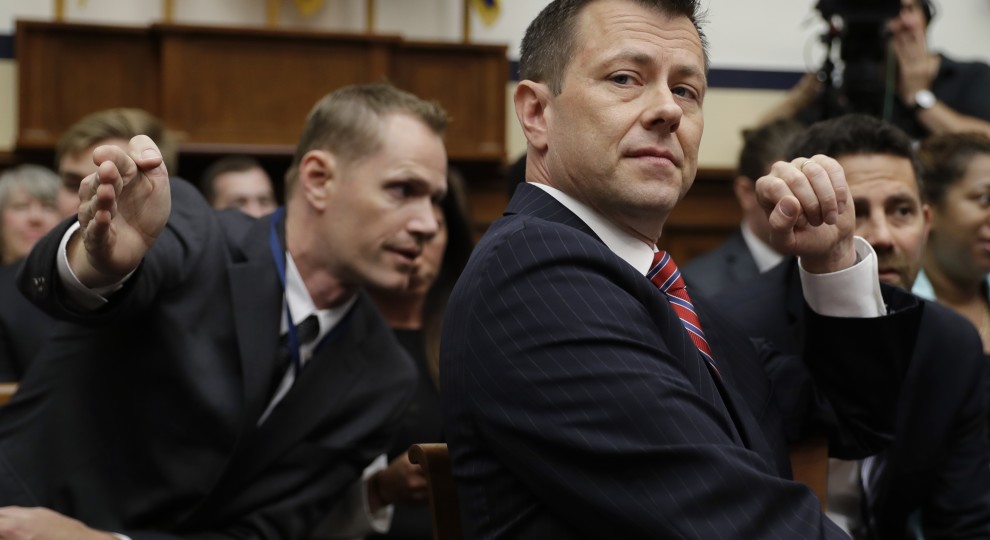 Peter Strzok made bad decisions in his handling of both investigations, and was biased.  Because of this, Republicans can claim victory.  Intent, on the other hand, is hard to prove, and as a consequence, Democrats can claim victory as well.  Both sides are applying separate standards when gauging Strzok’s performance, with Republicans saying that a clear preponderance of the evidence says Strzok’s bias tainted the investigation, and Democrats saying, ‘Prove it.’

How do you prove that bias was the basis for decision making, unless you are allowed to assume that where bias exists, and bad decisions were made that are consistent with that bias, bias was the cause? The IG found that bias existed, and that bad decisions were made, consistent with that bias, but the IG was not willing to make the logical leap that the bias then caused the bad decisions. From a ‘beyond a reasonable doubt’ perspective, I suppose the IG is correct, but we do not vote based on the standard of ‘beyond a reasonable doubt’.

There are actually three questions that have to be answered.

The first answer is, ‘was Strzok biased, personally?’  We know the answer here to be yes.

The second question is, ‘was Strozok biased professionally?’  Strozok says that he checked his bias when doing his job, and that his investigations were impartial and fair, performed with enough professional detachment to provide an open mind. Democrats seem to agree. Republicans, of course, are more than skeptical, and particularly since Strzok straight up said he was conducting a biased investigation in some of his text messages and emails, relating to both the HRC and the Trump investigations.  We each have to decide for ourselves whether or not we want to believe Strzok’s words in his e-mails and text messages, where he clearly claims that his investigation is tainted by bias, or his words in Congressional testimony, where he claimed that he was not biased, and did not allow bias to infect his investigation.  I believe his professional integrity was compromised beyond repair.

The third question is whether or not the overall investigation has been impacted by bias, and if so, then to what degree. There is wide disagreement here too, between Democrats and Republicans.

A fourth question I would pose is this:

Do Democrats really care if the investigation against Trump is hopelessly tainted, or would they be happy to impeach Trump, even on false pretenses, if it gets him out of office? In other words, do Democrats hate Trump enough to impeach him without cause?

In answering this fourth question, I might mention that Maxine Waters is openly calling for people to harass anyone working for the Trump administration, not only anywhere they dare show themselves in public, but even outside their own homes.  Several Democrat House members have already moved for the house to open impeachment hearings, in spite of the fact that there has not been even an accusation of a crime.  The open hatred of all things Trump, by the political left, is absolutely deafening, and you will not convince me that a large number of Democrats would not be perfectly happy to impeach Trump without even bothering to accuse him of a crime.

Arguing that Strzok was not biased is a losing argument. Democrats would be better served arguing that his bias was justified, and that the investigation is still valid.  If a police officer thinks, at the beginning of an investigation, that they ‘know who done it’, that officer is, by definition, biased. But the police officer could also be correct.  The fact that someone is biased does not automatically mean that the person is wrong. It only means that they are not looking in other directions, and as such Democrats can make a viable argument that even though Strzok was biased, he was still correct.

Unlike the police officer in my example above, however, the Trump investigation did not start with a ‘who done it’ crime.  To say that it did requires the belief that Russian nationals committed a crime by interfering in our election, but to believe that requires us to view posting on Facebook and Twitter as being criminal, and even if we were willing to say that, in a nation that prides itself on the Freedom of Speech, on what grounds can we charge foreign nationals with violating an American law, when they were not on American soil?  Our laws apply to two classes of people – American citizens (wherever they may be), and people on American soil.  We have no jurisdiction to charge Russians, acting on Russian soil, with violating American laws, and particularly not when the activities they were committing are not even illegal in the United States.

The Trump investigation started with a person.  We are not investigating to see ‘who done it.’  We are starting with Donald Trump, and investigating to see if we can find anything he may have done that could in some way be construed as illegal.  Such a fishing expedition is unprecedented, and bias is a very real problem.

Here is a prediction – and yes, when it happens I am going to remind you that I predicted it…  Mueller will do something constituting an October Surprise, and it will be all over the press, leading up to the midterm elections.  After the midterm elections are over, and it is time for Mueller to put up or shut up with his October Surprise, Mueller will walk back from it, and the investigation will continue on as if nothing happened.  If I am right, and that happens, you can take it as clear proof that the FBI is working hand-in-hand with the Democrat National Committee.  That would be a crime, and one of the biggest political scandals in our nation’s history, and mark my words – it is going to happen.