One of the biggest lies on the political left is the one that says sexual assault allegations are virtually always true.  The left touts studies that ‘prove’ how rare false allegations are (such as this one), but those studies, if you actually read them, are based on the bogus assumption that all allegations that are not specifically proven to be false must then be true.

In the vast majority of sexual assault cases, two people give different accounts of the same incident.  It is very rare for either the accused, or the supposed victim, to be able to prove their case.  In the vast majority of cases, it ends up being based on ‘he said / she said,’ with no way to prove which version of events is accurate, and in many cases, the two stories are identical, other than in those specific details that would indicated whether or not the supposed victim consented.  Studies that assume the victim is telling the truth in every case where the victim cannot be proven to be lying are complete fabrications, and in fact other studies, that look at the number of cases where sexual assault can be proven to have occurred vs. the number of cases where it can be proven not to have occurred, and then assume similar patterns for the cases that are not provable one way or the other, come up with numbers more like 40%.  Should we automatically believe the victim if 40% of the time, the accusations are false?

The American legal tradition has a long-standing methodology in place to determine how to handle cases where critical facts are in dispute.  That tradition is called ‘due process,’ and it demands allegations be proven beyond some ‘burden of proof’.  In all cases, we assume the accused to be innocent unless the correct burden of proof has been met. 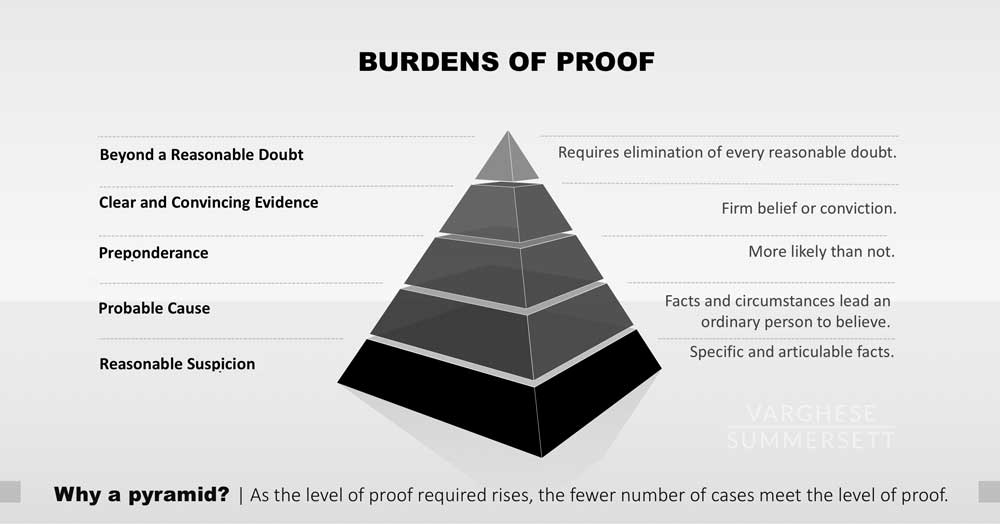 In cases where a judge is asked to sign-off on a search warrant, or an arrest, ‘reasonable suspicion’ is needed.  To conduct a warrantless search, or to make an arrest without first seeking an arrest warrant, a police officer must have ‘probable cause’.  A ‘preponderance’ of proof indicates that it is more likely than not that an accusation is true, and this is enough to award damages in civil court.  Above that we have the standard of ‘clear and convincing evidence,’ which is used in paternity cases, competency cases, and a number of other legal areas.  Finally we have what it takes to convict someone of a crime, which is proof ‘beyond a reasonable doubt.’

Dr. Ford cannot provide a date, or location, for the supposed assault.  Dr. Ford named four witnesses, all of whom either say that the event she described never happened, or that they have no memory of it.  The lack of evidence would tend to suggest that the recovered memories could be at least partially imagined.  Furthermore, two people other than Brett Kavanaugh have come forward and said that they may have sexually assaulted Dr. Ford under circumstances similar to what she remembers in her recovered memory, suggesting that the memory could be true, but that the specific detail of Brett Kavanaugh being the perpetrator may be imagined.  Both Dr. Ford and Judge Kavanaugh gave impassioned, compelling testimony.  Those are the facts.

Let us look to see what level of burden of proof we might be able to meet, based on the details of this case…

We can’t say we have a preponderance of the evidence, as there is no evidence, and there are no witnesses to corroborate any part of Dr. Ford’s testimony, except for two people who think Dr. Ford might be talking about them rather than Brett Kavanaugh.  According to the American Psychological Association, regardless of what Dr. Ford herself believes, as a victim, even Dr. Ford has to doubt her memory when talking as a psychologist.  Dr. Ford would not even be allowed to accuse Judge Kavanaugh in a court of law, so we cannot say we have probable cause.  How about reasonable suspicion?  We certainly had reasonable suspicion when the accusation first arose, but the only fact we have is that Dr. Ford has a memory of the event that may or may not be imagined.  As more information came to light, reasonable suspicion was lost – not strengthened.

The confirmation, of course, did continue, and Brett Kavanaugh was first confirmed and then sworn in as a Supreme Court Justice.

There were many who had other objections to Brett Kavanaugh serving on the Supreme Court, and people have a right to their opinions on those other objections, but Dr. Ford’s accusation should not have remained a factor once all the facts were known, and though justice may not have been pretty, it was served.

Now let’s look at the reaction to the confirmation, and to the implications moving forward.

CNN ran an article after the confirmation, calling it an international disgrace, and saying that our moral fabric has shifted toward the dark ages – comparing how Republicans treat women in America today to how women are treated under Sharia Law.  Democrats, across the board, are already promising to impeach Brett Kavanaugh.  People are protesting in the streets.  The left has literally come unglued by Republicans’ refusal to throw out Kavanaugh based on an accusation that did not meet any burden of proof.

I want each and every person reading this to think very clearly about what is at stake, when an entire political party wants to impeach a sitting Supreme Court Justice, for a supposed offense that cannot be proven to have happened beyond any legal standard that exists in American jurisprudence.  This election is not just about Brett Kavanaugh, Donald Trump, and the state of our economy.  This election is much bigger than that.  In this election the American people will decide whether to live in a world where due process exists, or one where we convict people even when there is no reasonable suspicion that a crime took place.  We are voting on the future of due process, and on the nature of the American legal system.

CNN is correct that our country is an international disgrace, but it is a disgrace because so many people read, and agree with, such ridiculous articles as the one they ran.  We are an international joke because a large percentage of our population wants to eliminate due process protections, at least as they pertain to men.  We should not just be voting against such an agenda – we should be openly protesting such demands in the streets.  This is the kind of outrage one throws tea in the harbor over.  Due process is the mortar holding our nation’s foundation together, and without due process, none of our other civil rights are enforceable.

If you are a man, a mother, a sister, an aunt, a niece, a daughter, or anyone else who has men in your life that you love, you cannot vote democrat in the midterms.  You cannot do it.  If you do vote democrat, then you are voting to hold men guilty until proven innocent, throwing every legal standard we have, out the window.  Such a thing cannot stand, and if we conservatives show up on election day, and vote as a block, such an outrage will not stand.

I will vote for due process.  Will you vote with me?

As always, if you agree with our message, please help us to share it.  Share it wide and far.  For your convenience, we have included buttons below that you can use to quickly share this article all over social media.  Tell your friends and family that due process is on the ballot!