Really.  I mean that.  Take Greece.  In 2013, their government spent 62.3% of their GDP.  There are, of course, only three ways a government can get money: 1) tax it, 2) borrow it, or 3) print it.  Greece, being on the Euro, cannot print money, so they were down to two options – taxing or borrowing.  What tax rate would Greece have needed to tax it’s real, organic economy (the 37.7% not driven by government spending) to fund the 62.3% of the economy driven directly by government?  Even if they had taxed the organic part of their economy at 100%, they would still only have had enough to fund 75% of their government.  Greece needed massive amounts of borrowing to fund their government, no matter what they taxed.

Greece’s real problem was not just that government spending was out of control; it was that their economy was nowhere near as big as they were pretending, and their government was borrowing recklessly to augment things.  To put it into perspective, let’s say that you had a job that paid $37,700, but you borrowed $62,300 every year on credit cards, and spent $100,000.  Could you sustain that?  That was what Greece looked like in 2013.

Cutting 62.3% of your budget would not be easy.  The lifestyle of a family making $37,700 a year is very different than the lifestyle of one making $100,000 per year.  It is entirely possible that after years of borrowing, you might have to go through bankruptcy.  Hard as it would be though, you would get through it, and once you were living within your means, you might even begin to see your income grow.

Greece was in the same boat in 2013, and their long-term solution (imposed by Germany) was to cut government, and sell off assets, until Greece was at a point where it could pay its bills.

Had Greece been on the Drachma, they could have printed money rather than borrowing.  Our MMT friends tell us that governments who are in charge of their own money supplies can always print more, and can never go bankrupt.  What our MMT friends forget is that countries can easily bankrupt their populace, as happened when the Weimar Republic took their advice.

Greece is a special case in that tax evasion is a national pastime.  How bad is it?  Five years ago, the Greek government sent inspectors out to a government owned beach on the Ionian sea, near the city of Katakolo, to sell it.  The inspectors found over 7,000 homes on the property.  The Greek people had built more than 7,000 homes on government land, with no permission, and no government records of the homes having been built.  None of those residents were paying property taxes, which are high in Greece.  Rather than bulldozing the homes and selling the land, the government decided to let the people who built those homes stay, tax free.  You can read more at http://www.nytimes.com/2012/11/18/business/privatizing-greece-slowly-but-not-surely.html.  Greece also has a long history of defaulting on its debt, as you can read at http://www.investopedia.com/financial-edge/0911/the-history-of-greek-sovereign-debt-defaults.aspx.

My numbers on Greece came from https://tradingeconomics.com/greece/government-spending-to-gdp.

The United States is in better shape.  Our federal government spent $4.2 trillion dollars last year (FY 2017) with $3.6 trillion in revenues.  That’s a difference of $600 billion.  Unlike Greece, we do control our currency, and we had 1.39% inflation last year.  We also had 2.4% economic growth, on an economy of $18.56 trillion.  We can afford to run a deficit equal to our rate of inflation plus our rate of growth, or $703 billion last year.  With a deficit of $600 billion, our debt to GDP ratio actually dropped $103 billion last year.  That’s not bad, and while the total level of debt is still a concern, we will never actually pay it down.  We will do what we always do – use a combination of growth and inflation to reduce our debt to GDP ratio over time.

The fastest rate of growth our nation has had in recent history was the post-war boom, from the late 1940s through the early 1960s.  The boom was caused by two things: 1) the rest of the world was rebuilding, and the United States was the only source of supply, and 2) we stopped growing government, using a combination of growth and inflation to reduce our debt to GDP ratio.  Someone is going to mention that we also had top marginal rates of 92%.  Yes we did, but very little income was taxed at those rates, as evidenced by the following two slides.  The first one shows that as the top rate was reduced, total taxes taken (as a percent of GDP) stayed the same.  The second graph shows that lowering the top tax bracket has actually increased the tax burden paid by the richest 1%.  These two graphs blow the liberal myth of a big government causing the economic boom out of the water.  It never happened. 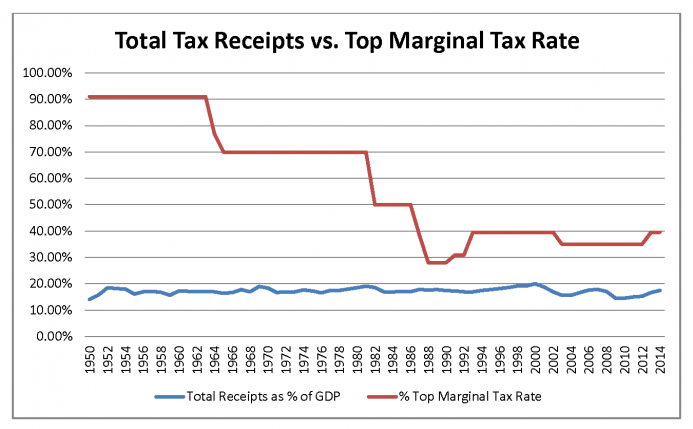 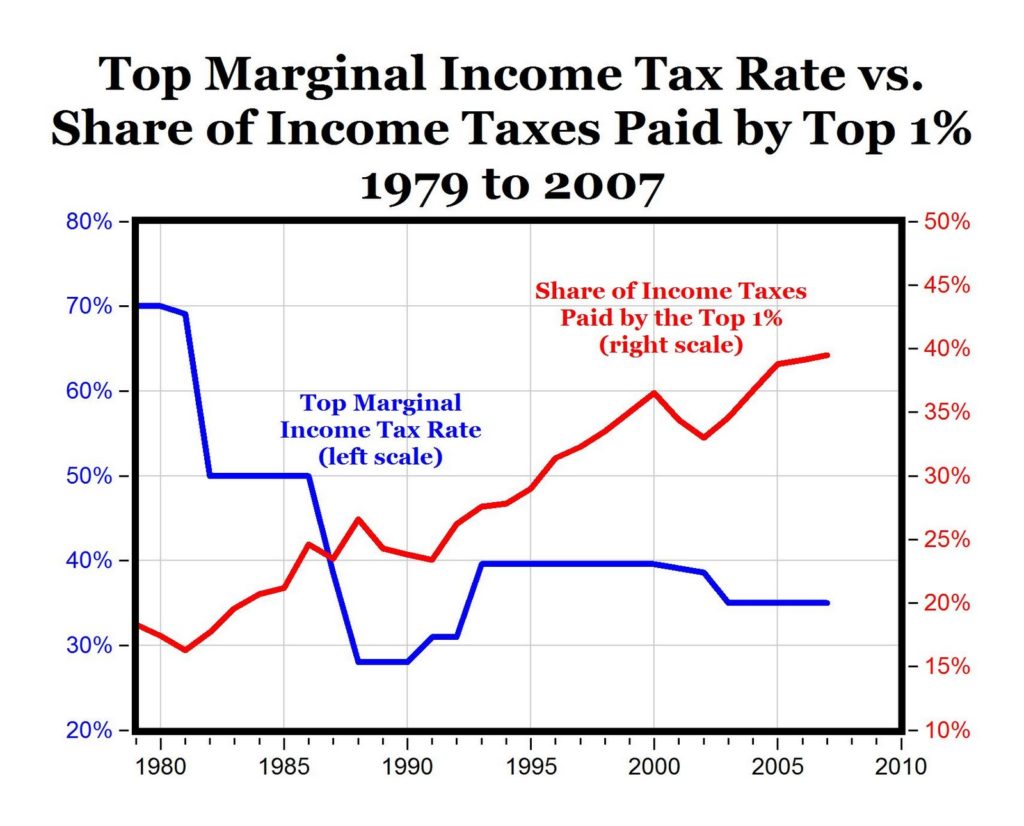 The Heritage foundation has a lengthy report that shows exactly how high rates of government spending (such as we have today) reduces economic growth, at http://www.heritage.org/budget-and-spending/report/the-impact-government-spending-economic-growth.

Imagine a country where total government spending, at all levels, accounts for just 20% of GDP.  Imagine too a stable 2% rate of inflation, and a long term average 4% rate of GDP growth after adjusting for inflation.  Would Democrats be happy if they could spend 6% more every year?  Would Republicans be happy if total government spending, at all levels combined, never exceeded 20% of GDP?  The average American today pays 40% of their income in total taxation at all levels of government combined.  Under this scenario, the average American would need pay only 14% in taxes.  Would the average American like to have 26% more income in their pockets?  What would you do with your 26%?

Democrats believe that a generous state grows the economy.  That’s backward; a growing economy enables government to grow.  Trying to grow government without growing the economy, as Democrats like to do, is the economic version of shooting yourself in the foot.

What people on both sides of the political spectrum need to understand is that we can grow the size of the government at the same pace our economy grows, without taxing a higher percent of the national income.  If we want a more generous state, that’s how we pay for it.

As a libertarian, I’m not going to tell you that government should do more, even if we can easily afford it.  I’d rather see government shrink below 20% of GDP, and I would think that as the wealth of the public grows, we would need less rather than more government.  At any rate, imagine having conversations about what government should and should not do from a backdrop of it being affordable, in a far wealthier country.  We should all want that.  And we should have that – all it costs is a little austerity, and in our case, only a little.  The time to act is now, before we become more like Greece.