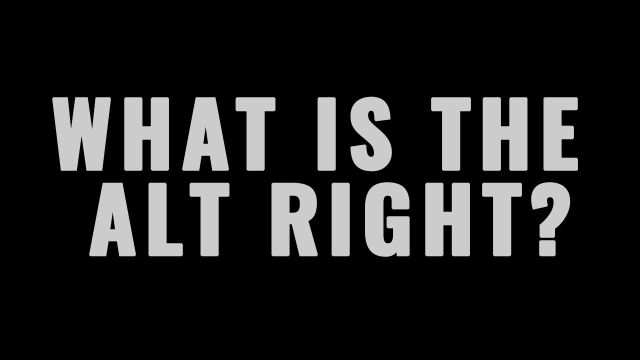 Every time I get into a political debate these days, someone on the left always seems to bring up the alt-right.  The implication is clear: the alt-right are a bunch of racists, and they claim to be on the right, therefore the Republican Party, and everyone on the right, is racist.  Never mind that this statement makes both the fallacy of association, as well as the fallacy of composition.  Liberals can’t see those logical fallacies, for identity politics – the basis of the Democrat platform – is based on these logical fallacies.

Let’s get something straight:  ‘Alt’ is short for ‘alternative,’ so ‘alt-right’ is ‘alternative right,’ which could also be phrased, ‘alternative to the right’.

Those in the alt-right have but one thing in common with the right, which is opposition to the left, but the alt-right is also opposed to the right, and somehow our friends on the left cannot see that.

Let’s look at some of the things today’s left, today’s right, and the alt-right, believe.

Identity groups invariably try to oppress one another.

Our society is dominated by cis gendered, straight, white men, (aka ‘white privilege’).

Freedom and liberty are the causes of oppression – groups with more power relative to others use their liberty to maintain power.

The left represents a ‘moral and intellectual elite’, who can be removed from the identity group power matrix, and given control over society, compressing groups on the bottom and top all onto one even plain, such that all identity groups are equal.

Social Justice requires that justice take group affiliation into account to ensure that all identity groups are treated equally.

The United States, and to a lesser degree, Western Europe (collectively ‘Western Society’) has been the most evil, oppressive society in world history, and has grown its wealth primarily by stealing it from the rest of the world through slavery, colonialization, and genocide.

Capitalism is a direct replacement for colonialization, and is an economic system designed to exploit the developing world.

Trade is a zero-sum game – every transaction has both a winner, and a loser.

The equitable redistribution of wealth leads to more consumption and a larger economy.

Identity groups do not exist.  We are all individuals, and individuals only.  The only ‘group’ that counts is ‘Americans’.

Our society no longer has artificial barriers to advancement for any group, except those that have been setup by the left, such as the minimum wage, and affirmative action.

We are all responsible for our own individual actions.

Freedom and liberty are the foundation of a fair and just society.

Justice is either an individual concept, or it does not exist.

Our society is not oppressive, and is the pinnacle of human achievement.

Free people interacting freely in free markets creates wealth, and wealth on an absolute scale is more meaningful that wealth on a relative scale.

Income inequality is a motivational force for personal, and societal, improvement.

Trade benefits everyone.  People only make transactions when both sides believe they will benefit.  Trade is NOT a zero-sum game.

Everywhere the Union Jack went up, so too did the Magna Carte, and England created the largest free trade zone in world history, with economic benefits for both England and England’s colonies.  Virtually all of the rich nations on Earth, outside of Western Europe, were at one time English colonies.

Redistributive policies reduce the incentive to work, altering the relationship between consumption and production such that production shrinks.  A society cannot distribute that which is not produced, so wealth redistribution makes a nation more poor.

Identity groups invariably try to oppress one another.

Our society is dominated by cis gendered, straight, white men (aka ‘white privilege’).

Freedom and liberty are the causes of oppression – groups with more power relative to others use their liberty to maintain power.

If groups are inherently oppressive, then it is better to be on the top than on the bottom.  White privilege should be preserved.

The left is trying to eliminate white privilege and should be stopped.

All systems involve race and races should be separated into separate societies.

Trade is a zero-sum game – every transaction has both a winner, and a loser.

All people of one’s race should be taken care of by their race/society.

When you think about it, anyone who believes in identity politics, with ethnicity defining some of those groups, is racist.  The very notion that group affiliation matters implies differences between groups, and the belief that some groups do better than others in a free and open society implies that those differences matter.  If you believe that sex matters, you are a sexist.  If you believe that being gay places you into an identity group, you are a homophobe.

I should point out that the entire sense of a ‘right – left dichotomy’ is false.  Not everyone on the left believes in postmodernism, and not everyone on the right is in any way a libertarian.  As such, though we can make generalized statements about what the left and right generally believe, it is important not to paint with too broad a brush.

The point is that the people on the alt-right are postmodernists, just as the heart and soul of today’s liberalism is, and they share a common, evil world view – a world view the vast majority of conservatives reject.  Is that a generality?  Sure, but it’s an accurate generality, and if you are on the left and you are not a postmodernist, all I can say is that we need more liberals like you to pull your party back from the abyss.

When we hear Black Lives Matter activists at Harvard openly saying that white life does not count (https://youtu.be/RC-Cqkq6zWc), and college professors openly calling for white genocide (http://www.cnn.com/2016/12/26/health/drexel-professor-white-genocide-trnd/index.html), can we really say that there is much difference between these groups and the alt-right?  Tom Curry, a professor at Texas A&M, called for white genocide in his classes, and the college defended his statements as constituting free speech (http://www.washingtonexaminer.com/texas-am-wont-fire-professor-who-called-for-killing-white-people/article/2622810).  Apparently, some people are OK with genocide, as long as the ‘right people’ die.  Adolf Hitler believed that too, though Hitler had different ideas about who the ‘right people’ were.  What happened to racism always being evil?

We get so caught up in terms, like ‘left’ and ‘right’, that we almost start to sound like we are rooting for our favorite football teams rather than debating matters of policy.  I’m not going to pretend that everyone on the left is bad, because they are not.  But postmodernists are a special kind of evil that has taken root on the left, and this must be called out.  Identity politics is not only divisive, but dangerous, and whether someone, on the grounds of identity politics, decides to kill in a predominantly African American church, or a predominantly white audience at a country music concert, the end result is that people die.

Our college campuses teach hate.  Many on the political left, and the entirety of the alt-right, preach hate.  How prevelant is it?  Hillary Clinton won the popular vote with her “Buckets of deplorables” comment, and now has a best selling book spewing hatred against the entire political spectrum, for costing her the election.