One of the greatest historians of the 20th century was Will Durant.  He wrote, amongst other things, a twelve book tomb collectively titled, “The History of Civilization.”  The first 100 or so odd pages of the first book, “The History of Civilization Volume One: Our Oriental Heritage” should be required reading in High School, as it outlines how, when, where, and perhaps most importantly, why human civilization started. 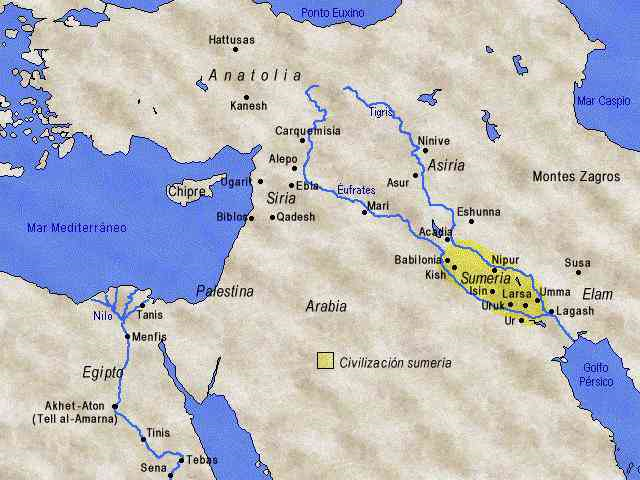 Interestingly enough, Genesis largely gets it right.  Human civilization emerged in ancient Sumeria (not to be confused with Samaria), between the Tigris and Euphrates rivers.  Nobody is sure when Sumeria was founded, but by 9,000 BC they had ox-pulled ploughs, and elaborate brick buildings.  One of their cities was Babel (as in the Tower of Babel), and Sumeria was destroyed around 5,000 BC, when a land bridge holding out the Persian Gulf burst, creating a massive flood .  About half of what had been Sumeria is today a part of the Persian Gulf.

For the next 2,500 years, the world had no civilization, until, around 2,500 BC, Egypt emerged, and shortly thereafter, Babylon emerged in roughly the same location as the northern part of Sumeria.  The city Babylon is believed to be on the ruins of the ancient city of Babel.

Genesis is the one book of the Torah that Moses did not author.  It was, rather, passed along among the Israelites, as an oral history, for thousands of years.  The Israelites were not the only people to tell an oral history – this was a common practice among ancient peoples.  The Israelites were however somewhat anal about getting their oral histories right.  Boys became men only when they could tell the entire oral history verbatim, with no errors, and even after the Torah was written, Jewish boys became men (at thirteen) only after demonstrating a word for word memorization of the Torah.  The bar mitzvah is based on this ancient practice.  As such, Genesis was passed along, generation to generation, intact, for an unknown thousands of years before ever having been written down.

In order to make the history easier to remember, allegory was used.  The emergence of civilization became the story of Adam and Eve.  The flood that destroyed civilization became Noah’s Ark.  The history was personalized, as characters are far easier to remember than are dates, and when one looks at Genesis as an allegorical, rather than a literal, account, the history is largely correct.

I don’t know whether or not the original Cultural Marxists read Will Durant.  Cultural Marxism was drawn up while Will Durant was still writing.  The early Cultural Marxists must have come to some of the same conclusions, however, for their prescription for destroying Western Civilization drew on the same themes: mix peoples of different languages and religions, and break down any societal cultures by turning people against their own history.

Those who are not familiar with Cultural Marxism can get a primer here: http://thedailylibertarian.com/cultural-marxism-primer/.

Do you know who else outperforms African Americans?  Africans who immigrate from Africa, and black Caribbean immigrants.  All groups, in fact, have historically performed as well economically, or better than, white Americans, on a per capita basis, within three generations of immigrating, except African Americans whose ancestry runs through the antebellum South (again from Thomas Sowell).

Asian and Indian Americans also tend to regress to the mean, but it takes, on average, longer than three generations.  Apparently it takes longer to lose cultural norms that lead to better economic outcomes than to lose cultural norms that lead to worse economic outcomes.  Whatever the case, culture matters, and it should be no surprise that those cultures that view success as ‘acting white’ do poorly, on a per capita basis, in terms of economic success.

The modern notion of multiculturalism – that all cultures are equal – has no historic, nor scientific backing.  Multiculturalism was literally made up out of thin air and assumed to be true for no reason at all, other than that it sounded good to the people who came up with it.  Worse yet, the implication of multiculturalism is self-defeating: by telling people, “Do not change your culture, ever, for any reason, and if you do not do as well as someone else, that is their fault and not yours,” holds people back.  The resentment of cultural appropriation denies the fact that the American culture was created by appropriation.  Ours is, quite literally, a ‘greatest hits’ album of world culture.  Should we reject our culture based on it holding elements of all kinds of cultures from all over the world, or should we embrace it, and continue to let it grow?  If we embrace our culture, then we must embrace the process that created it, and that continues to make it evolve, which is the acceptance of different peoples, who wish to become Americans, into our society.

The left focuses solely on the acceptance of different peoples, ignoring the ‘who wish to be Americans’ part.  The left wishes to accept all people, including those who have no desire to be Americans.  Worse yet, the left encourages people not to become Americans, but to keep whatever culture their ancestry came with.  To the degree that we learn from immigrants and begin to accept some of their cultural elements into the American culture, we are told we are doing something wrong.  At the same time, the left teaches to hate our ‘white privileged, paternalistic society’ (in spite of the fact that ethnicity and gender are terrible predictors of economic outcomes).  The left is not teaching unity and acceptance; they are teaching division and hate, and they are doing so with flat-out lies .

How is it that the left claims the moral high ground on a message of division and hate?  How is it that freedom loving Americans recoil when confronted with that which makes America great?  Immigrants do not come here to find division and hate; they come here to find better lives.  Do we give them better lives by telling them not to adapt, not to become educated, not to work, and not to love their fellow Americans?  Wake up America!  Culture matters, and it is high time that we, the American people, stand firm for the American Way.  Our culture is under assault, and with it our nation is under assault.  We are embroiled in a civil war, of words rather than weapons, and only one side is fighting.  If we wish to remain in a free and open society, we need to fight back, and we need to do so now.  Stop recoiling from the left, and openly reject their message of division and hate.